With the W-League shifted to align better with America's NWSL, Melbourne Victory are one of a number of clubs benefiting from an influx of American talent.

When the W-League pushed back its season to better align with the National Women's Soccer League in the United States, there was always going to be a flow-on effect.

Several Matildas have played in the NWSL for years, with plenty of Americans coming back the other way.

But with the seasons deliberately aligned better than ever, a fresh influx of Americans are seizing the opportunity to test themselves on new shores.

Melbourne Victory are one team to have benefited from the closer connection.

"I just finished my sixth season with the NWSL and I figured this was as good a time as any," Menges told AAP.

"It's hard to find training in the off-season and this league works out so well with our league back home.

"I've heard so many good things, I have had so many teammates who've come and played and absolutely loved it - not just the soccer but the experience as well."

Menges will use the W-League to hone her defensive craft under Jeff Hopkins and praised the professionalism of the environment.

"Everyone loves it over here and everyone uses it for what they need to use it for," she said.

For Hanson, who has one US senior cap, the W-League is an opportunity to build experience and - if things go well - put herself in the shop window for national team selection.

Abby Dahlkemper and Emily Sonnett became national team regulars after stints in the W-League. Now, they're both World Cup winners.

"(I'm) using this as a platform to further my career - hopefully solidify my spot on Houston then hopefully one day the national team and that's just always the goal," Hanson told AAP.

"So I'm just here to get better and be around quality players and quality coaches and it's a great opportunity."

Jenkins, who plays with Matildas Steph Catley and Lydia Williams in America, and has represented the USA at under-23 level, is also keen to kick on her career.

The trio will also reap the benefits of Victory's premiership-winning 2018-19 season, with the W-League club headed to South Korea later this month for the inaugural AFC Women's Club Championships.

But starting with Sunday's opener against Sydney FC, they've got one thing in sight: W-League silverware.

"Jeff (Hopkins) is so kind and really has a vision for the team and training has been fantastic - I've obviously only been here for a week but so far it's been really good," Jenkins told AAP. 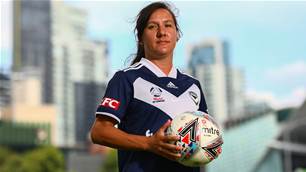 'Her own unique way of doing things...' - Lisa De Vanna ready to light up W-League