Here are three things we learned from the match.

1. USA have their weak points

While some fans may focus on the five goals scored in yesterday’s result for the USA over the Matildas, it’s the three goals conceded that will be of most interest to opposition teams and analysts heading into the World Cup.

The USA looked confident and comfortable when they were in possession; creating attacking width, opening up Australia’s shaky back line, and recycling the ball across their own defensive players regularly.

However, when the hosts were caught out of possession and the Matildas counter-attacked, several red flags began to appear. 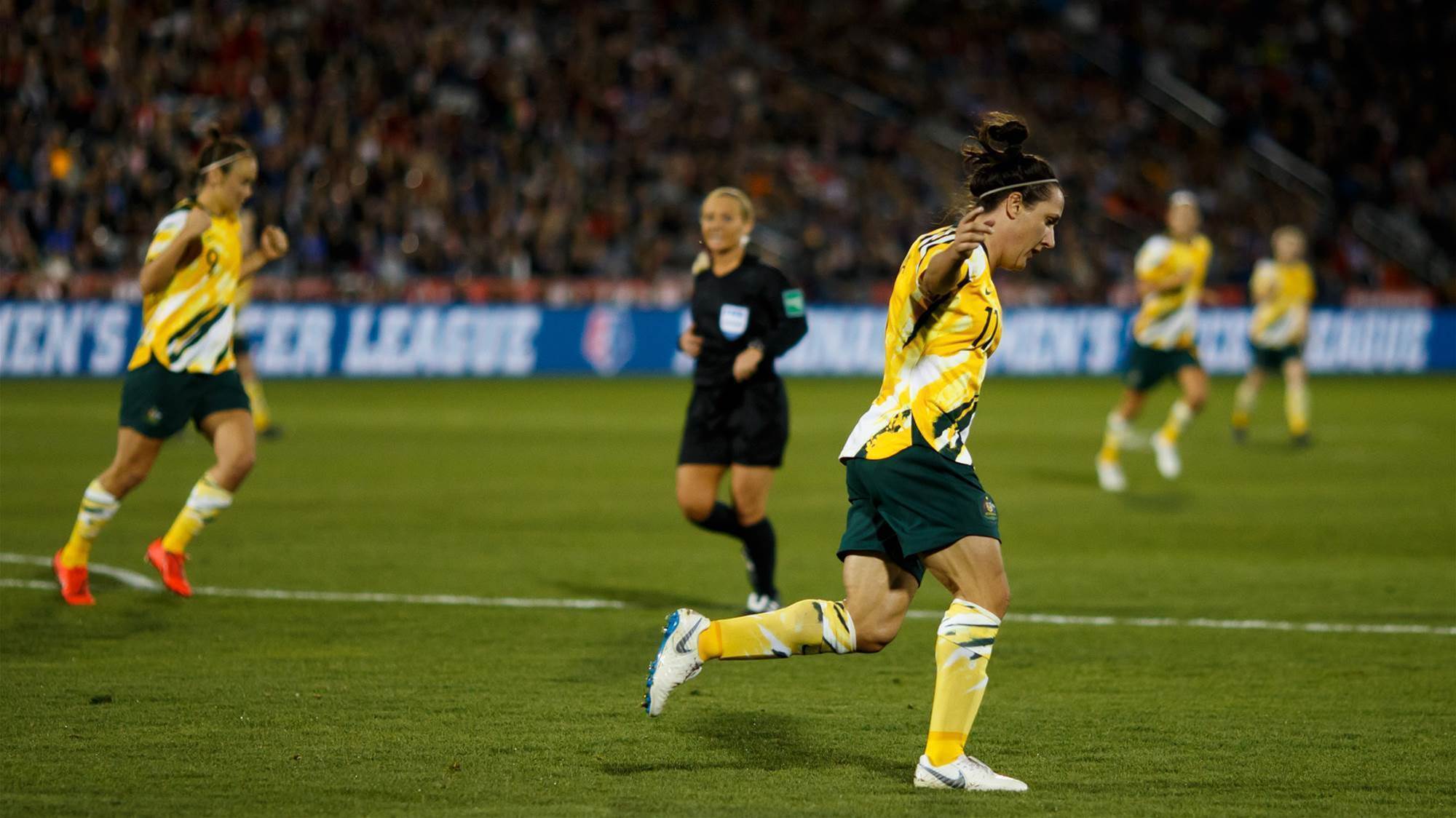 When Lisa De Vanna equalised for Australia in the 29th minute, a series of individual defensive errors by the USA made the goal all the more predictable.

A second major error came in the opening minutes of the second half, this time from Dahlkemper. When Foord picked the ball up in central midfield and charged at the USA defence, she had at least three players in front of her. However, with a bit of trickery, Foord was able to turn away from substitute Sam Mewis and take a step in-field.

Instead of moving forwards to make a tackle on Foord, Dahlkemper remained at a distance and tried to block, allowing Foord to get the ball onto her strong right foot and lash home the Matildas’ second of the game, having used Dahlkemper’s hesitation as a shield to keep Naeher unsighted before the ball was in the back of the net.

Their third and final major defensive error of the match came in the 80th minute. While substitute USA defender Tierna Davidson did well to pressure Matildas right-back Ellie Carpenter who’d made a charging run down the wing, fellow sub Christen Press was too easily sucked in to try and defend Carpenter.

As such, Press had left Matildas winger Hayley Raso in plenty of space and with enough time to send a pin-point cross onto the head of Sam Kerr for Australia’s third goal. Dahlkemper and full-back Crystal Dunn had lost track of each other and pulled too far apart, allowing Kerr the space to get in between them and power the ball past Naeher.

The USA have lacked defensive depth for a while, as question marks remain over the fitness of preferred right-back Kelly O’Hara. While veteran Ali Krieger was brought into camp for yesterday’s friendly, head coach Jill Ellis appears insistent on the Sonnett project.

The right side of the USA’s defensive line may be the weakest point, and one that teams will logically be looking to exploit the longer Ellis’ project takes to come to fruition.

2. Australia have defensive problems, too 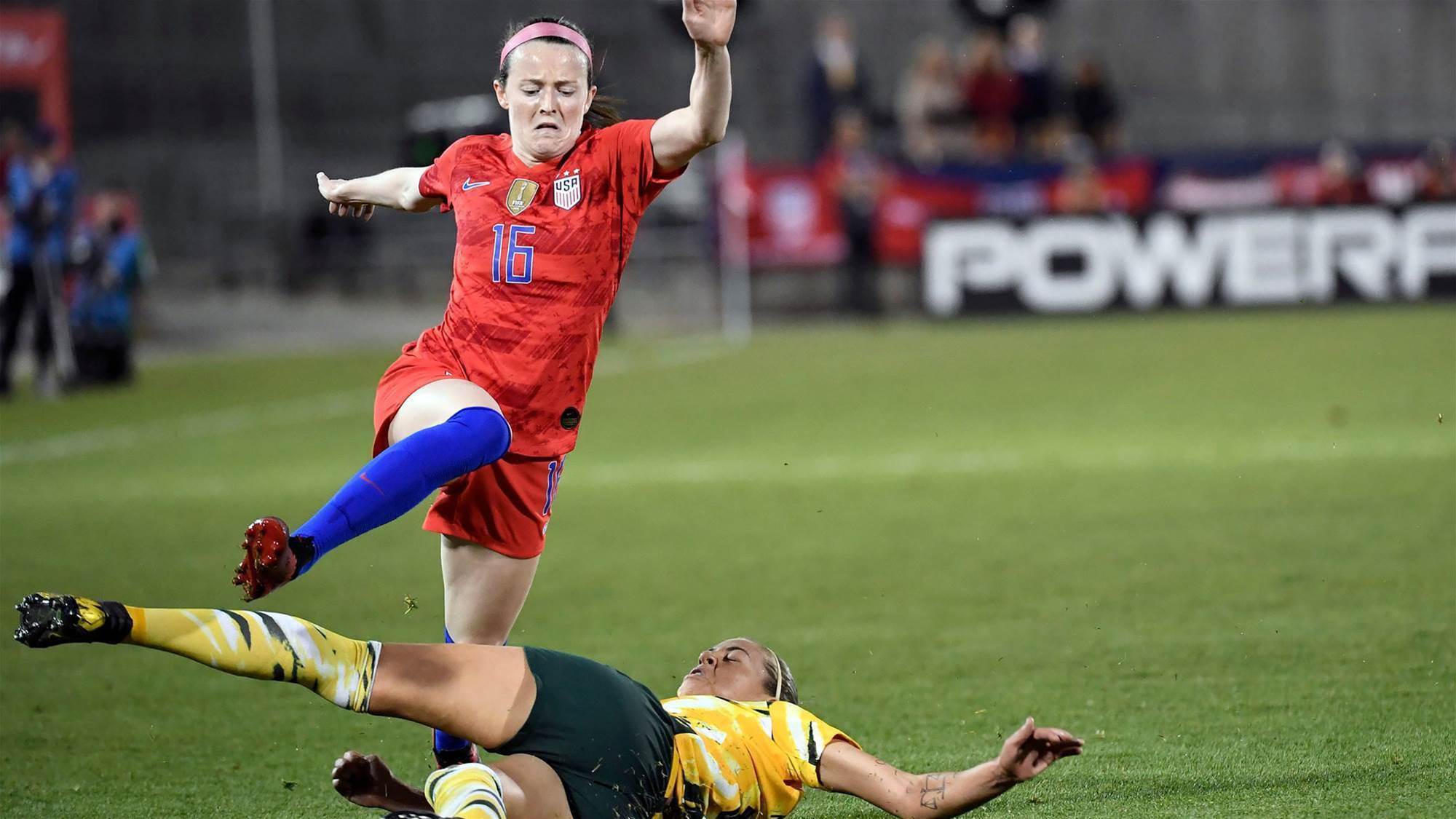 Steph Catley was a huge miss for the Matildas yesterday.

Not only does she have a wealth of experience playing at the top level against the kinds of players who will be featuring in the World Cup, but her speed, endurance, and wicked left foot means she is one of Australia’s best left-sided attacking players when she is given the opportunity to bomb forward.

One of the biggest questions heading into France in June is: in the absence of Catley, who can the Matildas turn to that offers a similar aggressive style while also staying defensively disciplined?

Yesterday, it was Newcastle Jets defender Gema Simon's turn. Unfortunately, Simon was not able to effectively fill the Catley gap in an attacking nor in a defensive manner.

Almost from the kick-off, Simon was tasked with marking Thorns forward and USA veteran Tobin Heath. While Heath is known for her trickery, it took a lot less to out-smart the inexperienced Simon; Heath was able to make several runs in behind, either from long through-balls or working in combinations with USA midfielder Rose Lavelle and overlapping full-back Sonnett.

In the opening period of the first half, it felt as though the first goal would be coming down this right side as the USA over-loaded Simon after recognising that she was out of her depth.

A goal was almost a certainty in this exact manner after Heath got in behind and tried to chip Williams, but the ball skipped just wide of the far post.

When pacey right winger Mallory Pugh was then substituted on in the 66th minute, it was only a matter of time before she would get the best of the exhausted Simon – ultimately scoring twice, in part because Simon was caught out of position. Whether the USA would have taken a similar approach against the more experienced Catley remains unknown.

Pugh’s second goal and the 8th goal of the night. This crazy unusual goal seems fitting to this high scoring game #USAvAUS pic.twitter.com/JLALWmpiSk

However, it wasn’t just Simon who had issues yesterday. While Carpenter was voted the Player of the Match by the Matildas fans, she too made defensive errors. Although her ability to bomb up the field, as a mirror to Catley, is often praised, her defensive discipline remains questionable.

For example, Carpenter’s forward movement meant she was well out of position for the USA’s opening goal—the long ball going straight over her head to Alex Morgan, who Clare Polkinghorne then had to shift across to try and defend.

Carpenter—watching the ball—was too far advanced up the field to be able to drop and help Polkinghorne keep Morgan at bay. Morgan then ended up bodying Polkinghorne off the ball and charging towards the area, turning the shifting Kennedy before scoring the USA’s first goal.

A look at Alex Morgan’s 100th goal. Started from the back with a ball in from Dahlkemper then Alex Morgan just takes over and beats the Matilda defense#USAvAUS pic.twitter.com/aDZjfti74h

Carpenter was also part of the collective fault for the USA’s equaliser by Tobin Heath. Charged with marking left winger Rapinoe, Carpenter allowed the veteran winger to get a cross in across the crowded six-yard box.

While it wasn’t met by any diving headers, the ball did come out the other side and to the feet of Sonnett, who clipped the ball into the back post where Rapinoe and Heath were waiting.

In the replays, you see the young Carpenter get up slowly from her first missed challenge on Rapinoe and simply watch on as the 33-year-old USA winger got up immediately and sprinted back into an attacking position. If Tobin Heath hadn’t have met the cross, Rapinoe – or the nearby Morgan – surely would have.

It’s an issue that will be plaguing head coach Ante Milicic so close to the World Cup, particularly given the history of injuries that Catley has had and the inconsistent performances of Carpenter.

Given the number of games that are played at these tournaments in such a short amount of time, a solid replacement for both Catley and Carpenter is needed—whether the players who are currently in camp with an eye for taking those spots are capable of stepping up when they need to remains unknown.

3. When should you play out from the back?

Playing out from the back is not new. It was a philosophy introduced to the Matildas by Alen Stajcic and is being continued now with Milicic.

The purpose of playing out from the back is to keep control of possession from the get-go and to be able to change the angle of attack from the very base of the formation. However, a new rule was trialled during yesterday’s friendly that could affect the ways in which all teams play out from the back from now on.

In the opening 15 minutes of yesterday’s match, the Matildas played out from the back several times – only this time, due to the new rule, the two central defenders of Kennedy and  Polkinghorne were almost square to Williams instead of being further up-field and wider.

Sitting deeper in the field meant that the press applied by the USA’s front three of Rapinoe, Morgan, and Heath was largely successful, forcing the Australian defenders to either make long, pointless clearances upfield or to kick the ball out of play, defeating the entire purpose of playing out from the back.

This is a rule change that all teams will have to adapt to.

Most interesting, perhaps, is that there is no longer the safety net of a defender being able to touch the ball inside the box when they’re under pressure, forcing the goal kick to be re-taken.

While the high press of the USA did leave space in behind them for Australia’s central midfielders to occupy, the inexperience of their defenders and the subsequent high press of the USA’s midfield meant that the ball was rarely retained by the visitors and played out through the central channels via Elise Kellond-Knight or Emily van Egmond.

Playing out from the back can work, but you have to have the players to make it work well.

These are the kinds of details that all head coaches will be paying attention to over the next two months in the lead-up to the World Cup. While the USA have four more international friendlies lined up, the Matildas currently have none.

One would hope that this is rectified as soon as possible so that Milicic has another chance to answer the many, many questions yesterday’s game asked.