Australia has given up a 1-0 lead in the dying stages of their Tournament of Nations (ToN) clash to draw 1-all with the USA.

Chloe Logarzo opened the scoring on 22 minutes, latching onto a through ball from Lisa De Vanna which had been preceded by a 60-metre burst.

Yet, just as it seemed Australia were on track for an outright lead in the standings, Lindsey Horan met Megan Rapinoe’s cross and headed home on 90 minutes.

Lindsey Horan with the goal, Tobin Heath with a dash of nutmeg. 😏 #BAONPDX #ToN2018 pic.twitter.com/p1xgihodR1

This galvanised the home team who searched for a winner, and almost came up trumps but for desperate Australian defending.

The USA dominated the opening proceedings, and should have been ahead were it not for profligate shooting and goalkeeper Lydia Williams.

In the 17th minute, Rapinoe caught Carpenter on the ball, and two passes later received a through ball from Morgan. Fortunately for Williams, Rapinoe could not bend the ball on target as she searched for the far post.

Less than a minute later, Rapinoe would almost turn provider as she caught Australia unawares. A quick throw-in played Morgan in on goal, but this time Williams was called into action and smothered the ball.

Yet, just as the USA seemed most likely to open the scoring, Australia’s quality shone through.

De Vanna controlled the second ball from a corner and, only metres out from her own box, turned her defender — an ostensibly risky decision.

But De Vanna once again showed why the status quo is merely a fallacy, as she drove forward with the ball for more than half the length of the field, playing a reverse ball in behind for Logarzo. The end result was merely a formality — the Sydney FC midfielder finding the bottom right corner and evading Naeher’s sprawling clutches.

The goal stunned the home side and seemingly injected confidence into the Matildas as they held a lead into the interval.

The second half began much like the first, but with more intensity and urgency from the USA as they searched for their equaliser.

Alex Morgan had headed chances off Rapinoe crosses, but was unable to convert either — in truth, they were half chances at best.

Alen Stajcic may have thought his team were about to make it two wins from two and claim their second consecutive ToN but the USA showed why their women are ranked first in the world.

With the game heading into injury time, the hosts pushed players forward for a corner. Rapinoe’s whipped cross sailed over the congestion, finding Horan who headed home from yards out.

Australia looked deflated and even susceptible to conceding another, yet, it wasn’t to be.

The Matildas must now win their final game against Japan, and hope their goal difference exceeds America and or Brazil’s to defend their ToN title. 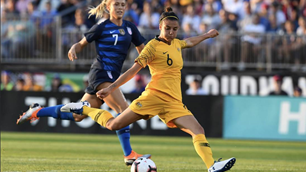