After conceding 10 goals across their first two games under Tony Gustavsson, the Matildas will have a more experienced squad for their next friendlies.

Australia slumped to a 5-2 loss to Germany and 5-0 defeat to the Netherlands in their first two games under Tony Gustavsson in April but have a vastly more experienced 25-player squad for June's friendlies.

The games are a crucial part of preparation for the Tokyo Olympics where Australia will face New Zealand, Sweden and the USA in the group stage.

It is a quintet with more than 400 combined international caps.

But there was no room for veteran forward Lisa De Vanna, who was called up for a training camp of Australian-based players last month but didn't make the final cut.

"When it comes to building the roster, we need to ensure we have balance across the squad. We need different player types. We need depth in different positions and need some players that provide flexibility between the lines," Gustavsson said.

"All of this means that difficult decisions had to be made, particularly in positions like the forward line where there is an abundance of talent but limited positions.

"Unfortunately, that has meant some top quality players have not been selected this time around, however, the door is still open as football is unpredictable and we always need to be adaptable."

Carpenter and Amy Harrison return after COVID-19 scares at their respective clubs ruled them out of the April window but midfielder Chloe Logarzo is a notable absentee, having missed Kansas City's recent NWSL matches through a hip injury.

W-League breakout star and 2019 World Cup standby player Kyra Cooney-Cross and fellow 19-year-olds Charlotte Grant, and Courtney Nevin are all in line to earn their first caps, along with uncapped goalkeeper Teagan Micah.

The Matildas head into camp in Sweden on June 6 and play Denmark at CASA Arena, Horsens on June 10 and Sweden at Kalmar Arena, Kalmar on June 11. 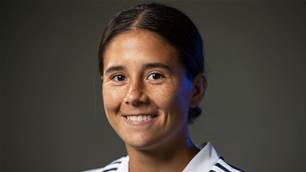