No more wooden spoons in the west! Western Sydney Wanderers have added some serious star power up front to keep them from winning the wooden spoon in season 12.

After a disappointing last season, the Wanderers are hoping some of their international signings will bring their winning ways with them as they try and avoid another bottom of the table finish.

Recent champions with the North Carolina Courage, Kristen Hamilton, Denise O’Sullivan and Lynn Williams all join the squad this summer and will be able to add some goals to the Wanderer’s tally.

But after conceding 30 goals last season, the Wanderers will also need to prove they’re capable of holding teams out.

Matilda and former cross-town rival Amy Harrison will swap the sky blue for red and black as she joins the Wanderer’s in the midfield.

Also fresh from a season in the US with the Washington Spirit, Harrison will be fit and ready to bring some control to a previously disorderly midfield. Hopefully more possession in this section of the park will limit the workload for an overrun defence.

Should teams break through this defence, the Wanderers will still have a strong chance to keep the ball from hitting the back of their net with Jada Whyman back between the sticks. Whyman was a vital part of the team last season with her incredible saves often keeping western Sydney in the game.

They’ll be out to prove they’re a different team this season as they take on Adelaide United at home in the first game of this W-League season.

WHAT WE LEARNED FROM LAST SEASON

A lot of things we possibly wish we hadn't, but almost nothing that we can take into this season under a brand new coach with a heavily refreshed squad.

Strike power and general cohesiveness up front was a huge issue for the cellar-dwelling Wanderers last season. From the ex-Wanderers we've spoken to in the lead up to this season, it appears the team had a genuine culture issue and a general lack of leadership.

The interesting question now becomes how Dean Heffernan and assistant Michael Beauchamp go about addressing these issues with what is still primarily a young squad. 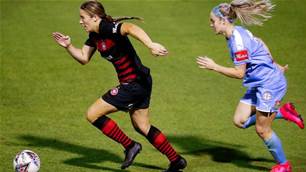