Newcastle Jets have completed their playing roster for the 2018/19 W-League season by announcing the signings of Libby Copus-Brown and Teigan Collister and re-signing of Pana Petratos.

After taking last season off, Libby Copus-Brown rejoins the club after a successful trial period, while Pana Petratos has resigned for a second season with the Jets. Joining the duo in the Hunter is former Young Matilda Teigan Collister who earns her first W-League contract after an impressive season with NPL NSW side North Shore Mariners.

Copus-Brown will link up with Jets coach Craig Deans for a second stint after previously playing under Deans in the 2015/16 W-League season. The midfielder made 16 appearances for the Jets during her first stint with the club, and after making the WPL Team of the Year with South Wallsend in the winter, will be hoping she can add to that number this season.

Petratos joined the Jets last season and featured seven times off the bench for Deans, but after a solid season with NPL NSW outfit North West Sydney Koalas she will be confident of playing a bigger role for the Jets this season.

While Collister may be relatively unknown in W-League circles, she will be keen to make a name for herself this season and promises to be an exciting prospect for the Jets. 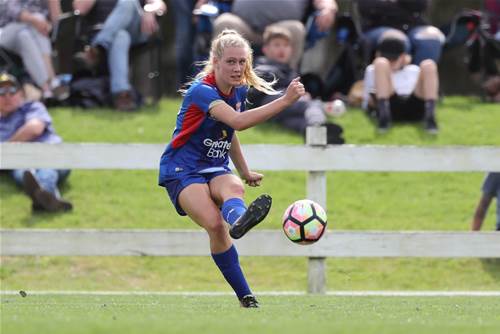 Teigan Collister in action for the Jets in their recent trial in Taree.

With the Jets enjoying the bye in the opening round, head coach Deans will have an extra week to prepare his side and is pleased to have added some additional quality to his squad.

“It’s great to have these three girls locked in for the season, they’re all very good players and they’ll bring a lot to the squad,” Deans said.

“Pana looks fit and strong, she did well in the NPL NSW over the winter and I definitely think she’ll play a lot more football this season.

“Teigan is an unknown quantity, she’s the type of player who you’d look to throw on late in the game when you need something different.

“Libby’s a player I know, she played for the Jets for a few years while I was here but took last year off. She rang me and said she was keen to play again, I invited her in for a trial and she did enough to earn a contract," he said.

The Jets will get their Westfield W-League campaign underway in Round 2 against Melbourne Victory on Thursday November 1 at Lakeside Stadium.