It was a heartbreaking loss for the Matildas in the Round of 16 penalty shootout against Norway.

Let's look at the three things we learnt from the clash.

It might be that the Matildas are still getting used to the style coach Ante Milicic has implemented, after all, he's been in charge for just 10 games, but the team seemed slow getting back to defend Norway's opening goal.

Norway played with fluid motion up the field for the majority of the game. They are a smart attacking side and being able to transition from an attacking play to defensive style for the Matildas would've helped combat this to some level.

It may be that the Matildas didn't have their regular defence available with Clare Polkinghorne not in the starting XI with a makeshift left side of Elise Kellond-Knight and Steph Catley.

It's a learning curb for Australia going forward though. There are still Olympic qualifiers coming up in early 2020 so there is time to grow ahead of another tournament.

Hayley Raso's ability to take on defenders created a number of chances which spurred a second-half comeback from Australia.

If forced Norway to commit fouls in unfavourable positions leading to free-kicks. While those free-kicks didn't lead to a goal, it led to dominating play from the Matildas up front and something Norway struggled to overcome.

It is an area Australia needs to do more of going forward because it can only lead to more chances in front of goal and more chances are only a positive. 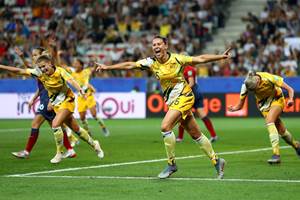 Australia started strongly but fell foul of the ref and VAR with calls going against them yet managed to hold Norway to 1-1 despite going down to 10...but were undone in the penalty shoot out. Check out the highlights now.

There has been a lot of pressure on the Matildas. The highs of 2017 are still with fans and media alike and we built them up to be this invincible team that couldn't lose. When that loss to Italy came along, it hit everyone just how human this team is.

The Miracle of Montpellier once again put the pressure back on the Matildas to make the Round of 16 and go further as they did in 2015. There were such high expectations for this team going to France but it's been a tough journey to get to this point.

At the end of the day, it just wasn't their time. It wasn't their time to become world champions. The Matildas will re-group and review their four games in France ahead of Olympic qualification. However, it is heartbreaking to know this is potentially the last World Cup for some players.

It's not only just a time to review what happened in France but where Australia is placed in women's football.

Why is the W-League is still a half-a-season competition? Is the NWSL the place for Matildas develop or should they be aiming for Europe? How does FFA continue the flow of talent to the Matildas? Do FFA need to change our approach to women's football in Australia?

There are many questions which need to be answered and looked at otherwise Australia might get left behind as nations like Italy, Spain, England, France, etc continue to put money into developing women's football.