There's still plenty of work to be done ahead of the Women's World Cup, admitted Matildas coach Ante Milicic after a sobering 5-3 defeat at the hands of the world champions, USA.

It was a 90 minute thrill ride in a spirited and exciting match up for the Matildas who went to the break level 1-1 after some quick-thinking goal line heroics from Ellie Carpenter to keep the Matildas in the game.

An early second half lead for Australia quickly disappeared in a tsunami of USA goals as the hosts surged ahead, and only a late soaring header from Sam Kerr kept the scoreline barely respectable, before the Americans struck again in the dying moments to stamp their authority. 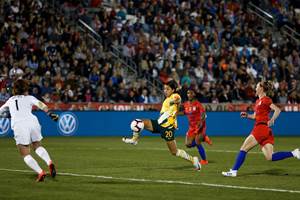 The Matildas have gone down 5-3 to the United States in one of their last friendlies before the FIFA Women's World Cup.

But despite the score, the action was non-stop at both ends and left coach Milicic with plenty to consider.

"I'm really looking forward to our pre-World Cup campaign so we can work on a lot of areas," he admitted after the match.

"I was proud of the girls that they stuck to our playing style. They worked on everything we gave them information about. They tried to execute everything.

"I just want them to lift their heads and to look forward. We've got so much improvement in us."

The newly-installed coach said this was just a warm up for when the two sides clash in the Women's World Cup in France in June...possibly even in the final. 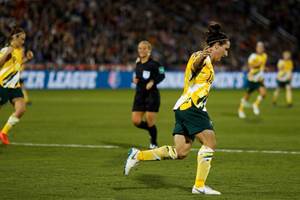 In pics: Matildas vs the USA

It wasn't the result they were hoping for but scoring three against the reigning World Champions was no small feat for the Matildas in their 5-3 loss against the USA. A thrilling game provided plenty of end to end action and so many moments to savour. Check our the pics.

"We're going to work ever so hard for the opportunity and the right to meet this USA team again deep in the tournament in France," said Milicic.

"Towards the end of the game, the players knew what they needed to do but we were clearly fatigued.

"Maybe against a lesser team, you might get away with a few of those incidents, but with the USA's quality, they make you pay.

"We'll work on our structure, defensively as well as to transition moments."

He also paid tribute to the preparation work the USA had put into their throw ins and general football smarts.

"I thought we were really poor in our defensive set up to throw ins," he said.

"We spend so much time analysing the US and they're incredible at how quickly they do it, how well they have trained their ballboys and girls is excellent.

"You create chances from there, you sneak a few yards. You are really a side that is so street smart," he told American journalists after the game.

"We worked on it but sometimes no matter how hard you try, we still couldn't stop it."

Milicic embraced the loss as a learning opportunity for the side and was looking forward to the post-match analysis session.

"There's a lot of work for us to do in a few areas.

"We'll be a lot richer for this experience, make no mistake."