Should FFA be focusing on W-League? Should W-League be a fulltime league? Should there be a focus on youth development?

Well, the answer isn't a simple one.

"My understanding is that the clubs are putting forward a strategy for A-League, W-League and Youth League so I think within those strategies we need to look really carefully at what would be the best outcome for the W-League," Independent Chair of the FFA Women’s Football Council Ros Moriarty told The Women's Game.

So what is Australia's model?

At the moment, W-League nearly fully aligns with A-League with the exception of Canberra United, who don't have a men's team. However, there have been talks of the possibility of not having W-League and A-League teams align like they currently do going forward.

However, this seems to be the way European teams are moving forward and even teams in Asia. The likes of Atletico Madrid, Manchester United and AC Milan all boast women's teams with Real Madrid becoming the latest to announce a women's program. 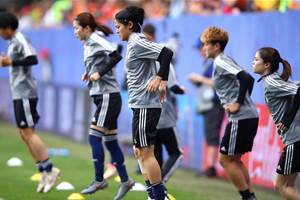 A massive difference though is that Europe has the Champions League which allows teams from leagues across the continent to come up against each other.

This is just not possible in Asia, for a number of reasons, so Australia is exposed less to big competitions unless it's on a national team level. Even then it can be difficult to get teams out here without local or state Government level support but that's another issue on its own.

Meanwhile, a fulltime league has been an idea that has also been thrown around but it poses its own questions and could be why it hasn't been implemented. The biggest resistance, it appears, is the possibility it will overlap with the NWSL season, where many Australians are currently plying their trade in the off-season.

If FFA were to run W-League for the full 18 rounds plus the two-week finals series and starting the same time as they did for the 2018/19 season, W-League would run into mid-March.

However, a full W-League season wouldn't always overlap with NWSL, there is a possibility that they could fit into the calendar quite well but it will take some discussion between both competition organisers to ensure this happens.

If this were to be a realised a fully professional W-League could become a reality.