Pat O’Connor admits she didn’t know much about soccer and literally hadn’t even kicked a ball until she was 24.

One night in 1965 at Bass Hill RSL, while with her son and husband, O’Connor saw a group of ladies running out onto the field. Encouraged by her husband Joe, O’Connor decided to join in, and the rest is history.

O’Connor, now 79, fondly remembers her first coach and the advice he gave her.

“He gave me a number 10 shirt, told me to play inside left, and asked me to score some goals...and that is how it all started for me,” recalls O’Connor.

After a few years of social football at Bass Hill, O’Connor wanted to start a proper women’s competition. In 1967, after again being encouraged by her now coach Joe, O’Connor put an ad in the local Sydney newspaper looking for players.

Several ladies put their hand up to show interest and there were enough players to have four teams. This was the beginning of the Metropolitan Ladies Soccer Association (MLSA). Many suggested four teams wasn’t enough to start a proper competition, though O'Connor wasn't having any of it.

“They said it wasn’t worth it and we said, of course it is, this is the start,” remembers O’Connor. “So we started with four teams.”

The ad in the paper also peaked the interest of the powerful Sydney Prague club, who contacted the O’Connor’s and invited them down to their club.

“When we put an ad in the paper looking for ladies, a committee man from Sydney Prague saw the ad and contacted us,” remembers O’Connor. "They sponsored us, provided facilities and fields."

After three undefeated years, and three Golden Boots, O'Connor and her team mates moved to powerhouse club St George Budapest, where they were welcomed by the legendary Johnny Warren.

"I worked with a guy who played for St George, he suggested going down to his club," explains O'Connor. "Johnny Warren was there and his brother Ross, who looked after us really well."

A year later an even greater honour was about to present itself for the star forward.

"In 1975, a guy in Singapore called George Charles Pereira wanted to start the first women's Asian Cup," explains O'Connor. "He wanted to contact a women's team in Australia but he didn't have any contacts.

“One of the men's club teams in Australia was playing social matches in Asia. He contacted them and they told him to ring me which he did."

The 1975 AFC Women's Championships, held in Hong Kong, was originally supposed to be a club competition but evolved into a tournament for nations. The St George team plus a few players from Ingleburn were originally slated to go, with O'Connor and coach Joe preparing the team. They spent the best part of 18 months fundraising so they could afford to go to the tournament.

When the tournament changed to an international competition, the Australian Womens Soccer Association (AWSA) wanted to send their own team. The FIFA recognised official governing body of Australian soccer in 1975 was the Australian Soccer Federation (ASF) and not the AWSA. The President of the ASF, Sir Arthur George, endorsed O'Connor's team and gave them permission to wear an 'Australian XI' jersey.

History has shown this 1975 Australian XI has never been recognised as an official national team, and none of the players received caps for going to Hong Kong. Many are now calling for this team to be recognised as the first Australian Women's team. O'Connor remains diplomatic about the situation.

"It is a difficult one, we called ourselves an Australian XI which we were sanctioned to do, but the team wasn't picked from the whole of Australia, it was essentially St George plus two players from Ingleburn,” admits O'Connor. "But at the time there was no official women's Australian team. We were the first women's team to go overseas and play in a tournament and wear the colours."

O'Connor had the distinction of captaining the Australian XI and scored the first goal in the opening match against Thailand on 25 August 1975. The Australian XI came third after beating Malaysia 5-0 in the third place play-off.

O'Connor is immensely proud of that team and their achievements.

"Gosh those girls worked so hard to get there in the first place, we did so many fundraisers. The girls in the team were top stuff and they really earned it."

The admiration is mutual with O'Connor and husband Joe much loved by the ladies from Sydney Prague, St George and the Australian XI. Many speak glowingly of the amount of work they put in to developing women's soccer in Australia.

As well as starting the MLSA, the O'Connors organised numerous tournaments and tours for ladies soccer teams from around the country, including the 1974 National Womens Championships. O’Connor was a foundation secretary of the AWSA and is a Life Member of the NSW Women’s Association.

She retired from playing in her 40s after moving to Western Australia. Joe played till he was 51.

It’s fair to say soccer played a huge part in the O’Connor household.

“We were a crazy soccer family,” admits O’Connor. “For the 10 years we were in Sydney, there was not much else talked about apart from soccer.

“We’d get up in the morning and we’d go to work, then come home and get changed and go to training.

“We’d train twice a week then played our match on Sunday. On Saturdays we’d practice for hours with the ladies, who’d often come over for a kick about.”

In 2001, O’Connor was finally recognised for her achievements after being inducted into the FFA Hall of Fame. Not bad for a lady who didn’t know how to kick a ball until she turned up one night at Bass Hill RSL.

PHOTO: Pat O’Connor picked up an impressive array of trophies in a glittering career. 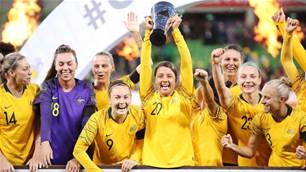 ‘Sam Kerr’s living my dream...and the whole country’s behind her’