Sydney can seal the W-League Premiership with a game to spare and striker Remy Siemsen is desperate for her first silverware.

As Sydney home in on their first W-League Premiers' Plate in 10 years, few players are more desperate to get a taste of silverware than Remy Siemsen.

The Sky Blues can wrap up top spot if they beat Melbourne Victory on Saturday, but it's an even more special game for Siemsen who is yet to win a trophy despite her lengthy stay at Sydney.

"To be able to lift some silverware with this group would be really special for me and I'm extra hungry," Siemsen said.

"That's what you want to do when you play with a club like Sydney - you want to be lifting the silverware."

The 21-year-old striker's lack of trophies is due to a combination of bad luck and worse timing.

Last year's joint golden boot winner played in losing Grand Final teams in 2017/18 and 2019/20, but in between those missed out on Sydney's most recent championship win.

Siemsen moved to cross-town rivals Western Sydney Wanderers ahead of the 2018/19 season but had a difficult campaign personally while her former teammates claimed the Championship.

"I wouldn't change the experience at all - I think that it definitely helped me grow as a player, obviously having a bit of a setback and hardship," Siemsen said.

"It was a big learning curve for me, I had another experience at another club and I'm grateful that Sydney welcomed me back with open arms.

"I'm really happy that I'm back in Sky Blue and I haven't looked back since."

Sydney have already qualified for finals and can seal the plate by beating Victory or with a win over Canberra United in their final game.

Brisbane Roar (22 points) are all but locked in for a finals spot with one game to play given their stellar goal difference of +14.

But for Siemsen, currently third in the Golden Boot, and Sydney, it's all about attempting to complete the elusive W-League double.

"We definitely have a special group this year - we know what's at stake, we've done the hard yards and we don't want to give it up right now - we're getting so close," Siemsen said.

"We're all very proud of the effort we've done this season but the job's not done yet, at all." 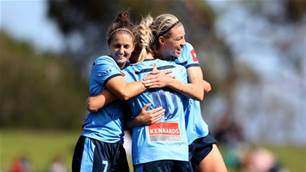