From earning a Matildas cap and being part of Perth Glory’s inaugural W-League squad at the tender age of 16, to moving across the country and playing in Melbourne Victory’s 2013/14 W-League championship winning campaign, the now 28-year-old can boast a football CV that would be the envy of many.

‘The Maestro’, as she is known among fans and team mates alike, has played 103 W-League games for the Glory, Victory and Wanderers over the past 12 years.

Her Matildas career has somewhat stalled since playing all six of her internationals for Australia back in 2008, however the West Australian product still continues to be a valuable contributor to Australian women’s football.

Not bad for a young lady who learned the game by “curling balls around pot plants” and “juggling a lot.”

It all started back in 1996 at Phoenix Park Junior SC, in a suburb called Hamilton Hills, south-west of Perth. Like the usual ethnic Australian kids, it was a family affair.

“Of course I had to copy my brother back in the day, so I started training with his team when I was about five,” explains Mastrantonio, who credits her family for her footballing success. “My dad was also a huge influence on me.

“My mum is also one of the strongest people I know, she will do anything for her family, which is an amazing trait to have.”

Her proud family were there in Bunbury last weekend as the star midfielder led the Red & Black to their maiden finals appearance with a Player-of-the-Match performance in a thrilling 3-2 win over Perth in the final round of the regular season.

The result ensured the Wanderwomen snuck into fourth spot, narrowly ahead of Brisbane Roar.

Mastrantonio has been a key link up player between defence and attack for the Wanderers this season.

Her ability to track back, provide an outlet for the back four, while being creative in the middle and setting up the likes of Kristen Hamilton, Kyra Cooney-Cross and Lynn Williams has been fabulous to watch this season.

To date, she has completed 690 passes at an accuracy of 80% with 18 goal scoring chances and two assists to boot. Add to this 18 interceptions, 11 clearances and a healthy appetite for tackling, Mastrantonio is the complete footballer.

Wanderer’s coach Dean Heffernan described her as having one of the best techniques in the world, while Matildas legend Joey Peters has led a chorus of calls for her to be drafted back into the national team.

Mastrantonio is flattered by all the compliments but admits donning the green and gold is something she holds dear.

“A dream come true,” she beamed, when asked to describe how she felt when receiving her first Matildas cap over a decade ago. “Representing your country is the highest possible milestone you can achieve as a footballer and something I strived for since I was very young.

“Of course, playing for your country is the best feeling an athlete can have, so I would love to have that feeling again.” 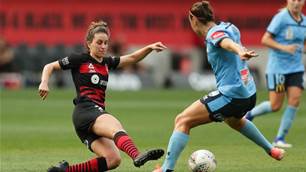 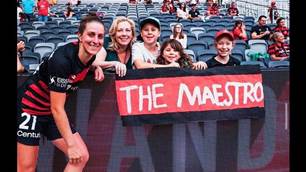 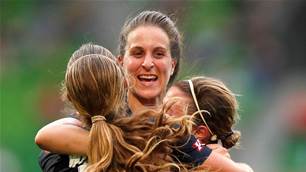