The young goalkeeper grew up in the Australian Women’s National Team youth system, and after high school, was splitting time between the Young Matildas and Western Sydney Wanderers of the W-League.

Her only distraction came from 7,497 miles away in Los Angeles, California.

One day during Wanderers training, Micah told teammates, American Keelin Winters and Canadian Carmelina Moscato, about a coach in America who was persistently calling her about coming to play for his team. The coach was Josh Walters at University of California at Los Angeles (UCLA).

Winters and Moscato gave each other a look of disbelief.

“You need to go!” said the internationals.

That short exchange gave the young goalkeeper pause, and a new perspective on where her career was and the possibility of where it could go.

“As I did more research and started speaking to Josh and the other UCLA coaches, I figured it was a great opportunity,” says Micah, now in her third year at UCLA.

“I just finished high school and I always knew that I wanted to mix my degree with soccer, so I thought I might as well give it a go. If I don't like it, I can always come back home.”

Micah soon found that she not only liked it, she thrived in the American college system. In 2017, the Redcliffe, Queensland native was named Pac-12 Goalkeeper of the Week, posted nine shutouts, saved a game-winning penalty kick in the College Cup semifinals, moved into fifth on UCLA’s all-time career shutout list, and led the nation in goalkeeper minutes played with 2,228.

Now early into the 2018 season, Micah has already been named Pac-12 Goalkeeper of the Week, was selected to the Top Drawer Soccer Team of the Week for the first time in her college career, and has moved into fifth place on UCLA’s career victory list.

In June 2017, during Tournament of Nations (ToN), another coach was persistently calling Micah.

“I had just finished training and I had all these phone calls from Staj. So I called him back and he asked, “What have you been doing?” It was quite a shock.”

Matildas Head Coach Alen Stajcic had a problem. With the ToN championship on the line, his starting goalkeeper Lydia Williams went down with an injury and he needed a backup goalkeeper. Once again, Teagan Micah answered the call.

Despite never entering the match, Micah experienced the opportunity of a lifetime as a member of the inaugural ToN Championship team. It also gave the youngster a chance to re-connect with her fellow Aussies.

“Soccer comes very natural to me, but I'm a big family girl and I love my friends as well, so obviously it’s very hard to be away from them,” says the soon-to-be 21-year old.

“There are days I really do miss home, especially when there are events going on that I’m missing. I think it’s making me mentally stronger. The bigger picture is that I’m at one of the best universities in the world playing soccer all the time. So, I guess I’m winning in the outlier.”

In the past, the American college soccer was an unknown for Aussie women. Now, with one more year to go at UCLA, Micah is helping to eliminate that unknown by paving a path for other Aussies to venture onto.

“By taking this path, we're showing the girls back home that there is another avenue,” adds Micah.

“There are great places to reach the Matildas back at home, but I think America does a really good job of mixing academics with soccer. You're playing so many games and getting degrees from the best universities in the world. I couldn’t speak more highly of it. I'm absolutely loving it.”

Micah is hoping to graduate in December 2019, making her eligible for the 2019 NWSL College Draft. History has shown however, that teams tend not to draft goalkeepers and especially ones that would take up an international spot. Micah understands the difficulty.

“I know a lot of the NWSL coaches watch our college games and they’re aware that I’m here,” says Micah in stride. “So, I’ll look to try that and if not, I can go home or try Europe. I have a lot of other avenues I can look to pursue.”

Pursue or pave? Either way, one thing is for certain, regardless of where the next call comes from, Teagan Micah will answer the call in more ways than one. 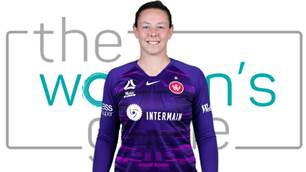