Italy played 4-4-2, with Barbara Bonansea occupying a deeper left midfield position (1) when Australia had possession, and breaking forward to provide an outlet on the left wing when Italy attacked.

Generally, Italy looked to play on the counterattack. This involved defending in a compact block around the halfway line (2), waiting for a loose pass or touch before counterattacking with early balls in behind the Australian defence.

Australia endured a shaky opening period, with Italy playing several early balls in behind Australia’s very high defensive line in the opening 15 minutes. This was exemplified by Italy’s early goal, which VAR ruled out for offside, although it appeared that Steph Catley was playing Bonansea onside.

Eventually, Australia settled into the game, with the defensive line adopting a slightly deeper position and opening space for their midfielders to get on the ball.

This would provoke the Italian forwards and midfielders to press. With Australia having a 3v2 overload in central midfield, this allowed Australia to easily find a free player (usually van Egmond (3)) who would release the fullbacks and wingers into the space created. In particular, Australia preferred to attack down their right via fullback Ellie Carpenter, who spent much of the game in advanced positions (4). Italy were unsure how to press against this 3v2. This was particularly clear when the Italian forwards and midfielders were drawn to press Australia high up the field (5), as shown here with Alanna Kennedy on the ball.

With the Italian defenders wary of joining the high press against the speed of Sam Kerr (6), this left a huge space between the Italian midfield and defence (7), and Australia were able to position one of Caitlin Foord or Tameka Yallop (8) between the lines. Unfortunately, this didn’t happen frequently enough. This indecision led to Australia’s opening goal, with Australia working the space to find overlapping fullback Carpenter open on the right. Seeing this, Kerr faked to move to Sara Gama’s blind side before checking back towards the near post, with this clever movement forcing Gama to concede a penalty.

Kerr converted to put Australia 1-0 up, and Australia generally looked comfortable from thereon, with Italy struggling to impose themselves in the game after their bright start.

This would continue into the second half, where despite some reshuffling of their lineup, Italy did not look like creating clear goalscoring opportunities.

It took an error from Clare Polkinghorne for Italy to draw level, with the centreback seemingly unaware of how close Bonansea was while Australia played out of the back. This lapse in concentration allowed Bonansea to steal the ball off Polkinghorne’s heavy first touch, and the Italian scored with ease past an exposed Lydia Williams.

Bonansea’s 56th-minute equaliser was very much against the run of play, with Italy not managing a shot on target from the 16th minute.

At 1-1, Italy grew in confidence and brought on experienced forward Daniela Sabatino to provide greater penetration. Whereas previously Italy’s forward pair of Ilaria Mauro and Cristiana Girelli drifted wide into the channels, Sabatino remained in central areas and provided a target for crosses and through balls.

As shown in the picture below, Italy are attacking down the right (9), with Sabatino’s presence as a central target (10) allowing Bonansea (11) to drift in from the left wing to work off her, and run in behind the Australian defence. 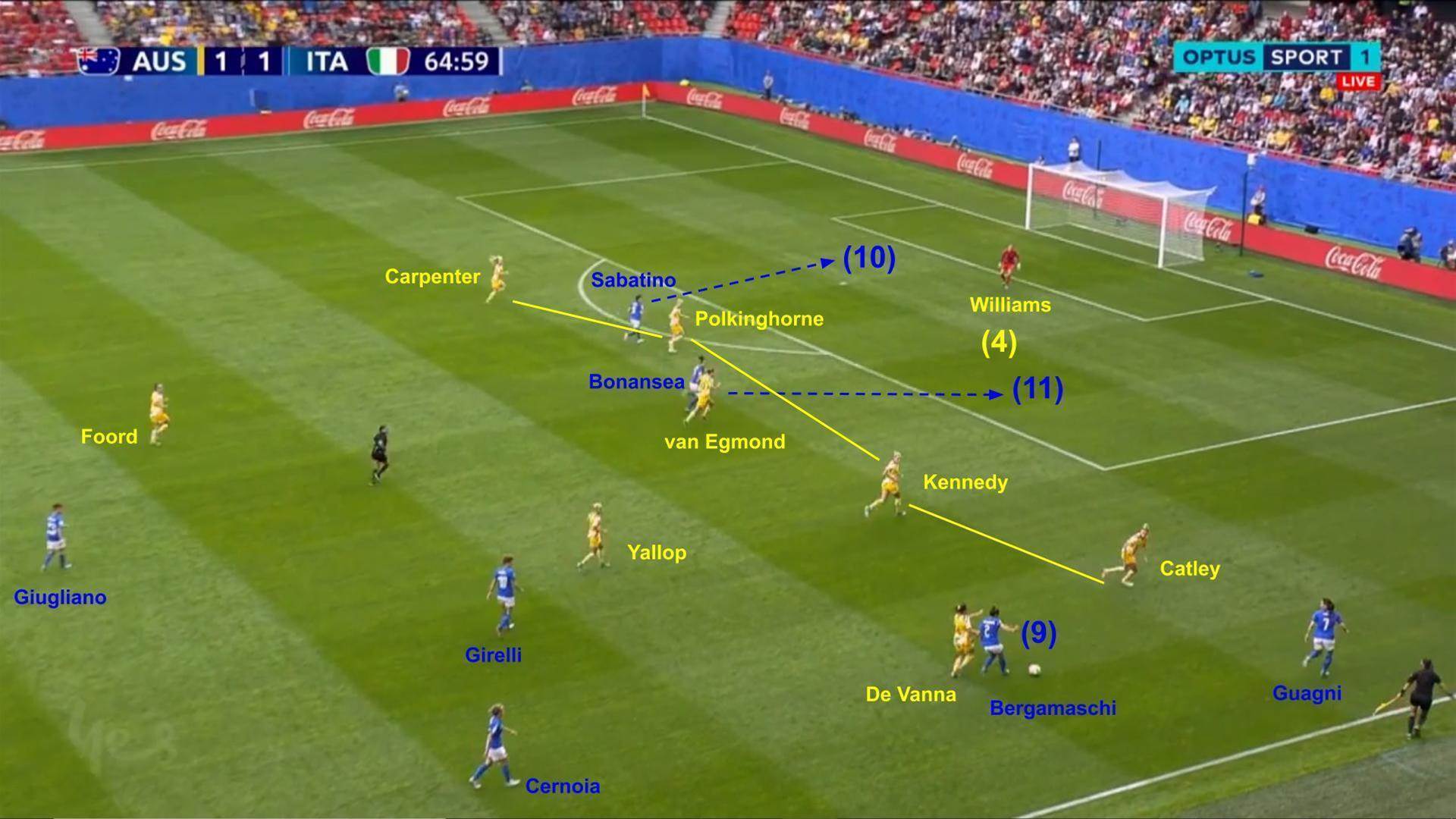 In response, Australia tried to defend a bit deeper. Here, Italy’s playmaker Manuela Giugliano is on the ball (12), and Australia has adopted a compact, deep block (13). While this photo is an extreme example of their deeper position, it demonstrates Australia’s shift in attitude as the game progressed.

Lisa De Vanna came on to add more pace on the counterattack, and Katrina Gorry (followed later Elise Kellond Knight) came on to stabilise the midfield. This also helped defend against the Italian fullbacks, who took up more advanced positions in the second half ((14) and (15)). Australia began to regain a foothold in the game and looked to secure the draw. Unfortunately, Williams’ questionable decision to come for a high ball in the 95th minute, when plenty of Australian defenders were around to challenge for the cross, allowed Bonansea to score and Italy to pick up a somewhat flattering win.

This took away from what was actually a solid performance from Australia, who controlled the game for long spells and looked to have done enough to deserve a draw.

Considering both Italian goals came from two very avoidable individual errors, there remains a cause for quiet optimism in Australia’s remaining two games of the group stage. In particular, the characteristics of the Australian attackers are better suited towards playing on the break, and their pace and directness should cause Brazil problems in their next match.

The author is an experienced football coach, having coached over 200 games at the development and senior level. He has completed the FFA B Licence and runs the Facebook page "Tacticology", covering the NPLW Victoria.