The game was a perfect encapsulation of their World Cup - admirable fighting spirit to mount a late comeback, but the same shortcomings ultimately proving fatal.

At this World Cup, Australia’s brightest attacking moments have generally come on the counterattack. The pace and athleticism of forwards Sam Kerr, Caitlin Foord, Lisa de Vanna, Emily Gielnik, and Hayley Raso means they are most dangerous when they have space to run into.

Furthermore, Australia lack midfielders who are capable of playing passing combinations in tight spaces and playing dangerous through balls. Only Emily van Egmond and Katrina Gorry really fit the bill, but the former has been used in a deeper position far from goal, while the latter has had limited game time.

It’s no surprise then that Australia has struggled against teams set in their defensive block. As a result, instead of playing through teams, Australia try to play around them. A typical Australia attack begins with short passing between the centrebacks and holding midfielder van Egmond, before passing it out wide and aiming crosses for the head of Sam Kerr.

This worked against teams without strong centrebacks (see Jamaica), but not so against Italy or Brazil previously, or Norway here.

In the photo below, centreback Steph Catley has the ball (1). With Norway in a compact low block (2), we see Australia set up to overload the wide areas, with both the fullback (3) and winger (4) tight to the sideline.

No Australian midfielder is in a position to receive between the lines, and without a rotation (for example, (5)), Norway’s lines didn’t have to worry about being split or turned towards their own goal.

This lack of movement and rotation was evident here (and in previous games), and made it easy and predictable for Norway to defend. Consequently, outside of the first 5 minutes (more of this later), Australia barely posed a threat in the first half. In the second half, Australia started to look more dangerous, with Tameka Yallop and Chloe Logarzo in between the lines more frequently. This allowed them to break into the gaps created by the Norwegian fullbacks coming out to mark Australia’s wingers, as shown below.

Here, Australia has built up as usual, with fullback Ellie Carpenter receiving the pass (6). Norway left back Kristine Minde is drawn out of the block in anticipation of the pass to Raso (7), opening a space for Yallop to run into (8) and receive Carpenter’s pass (9). This type of midfield run put pressure on Norway’s defence, and helped Australia win a succession of corners. Appropriately, Australia scored from this route. On the park however, Norway had their wide midfielders Karina Saevik and Guro Reiten tuck inside (10) as shown below. This meant it was the Australians who were instead overloaded in this crucial zone (11). 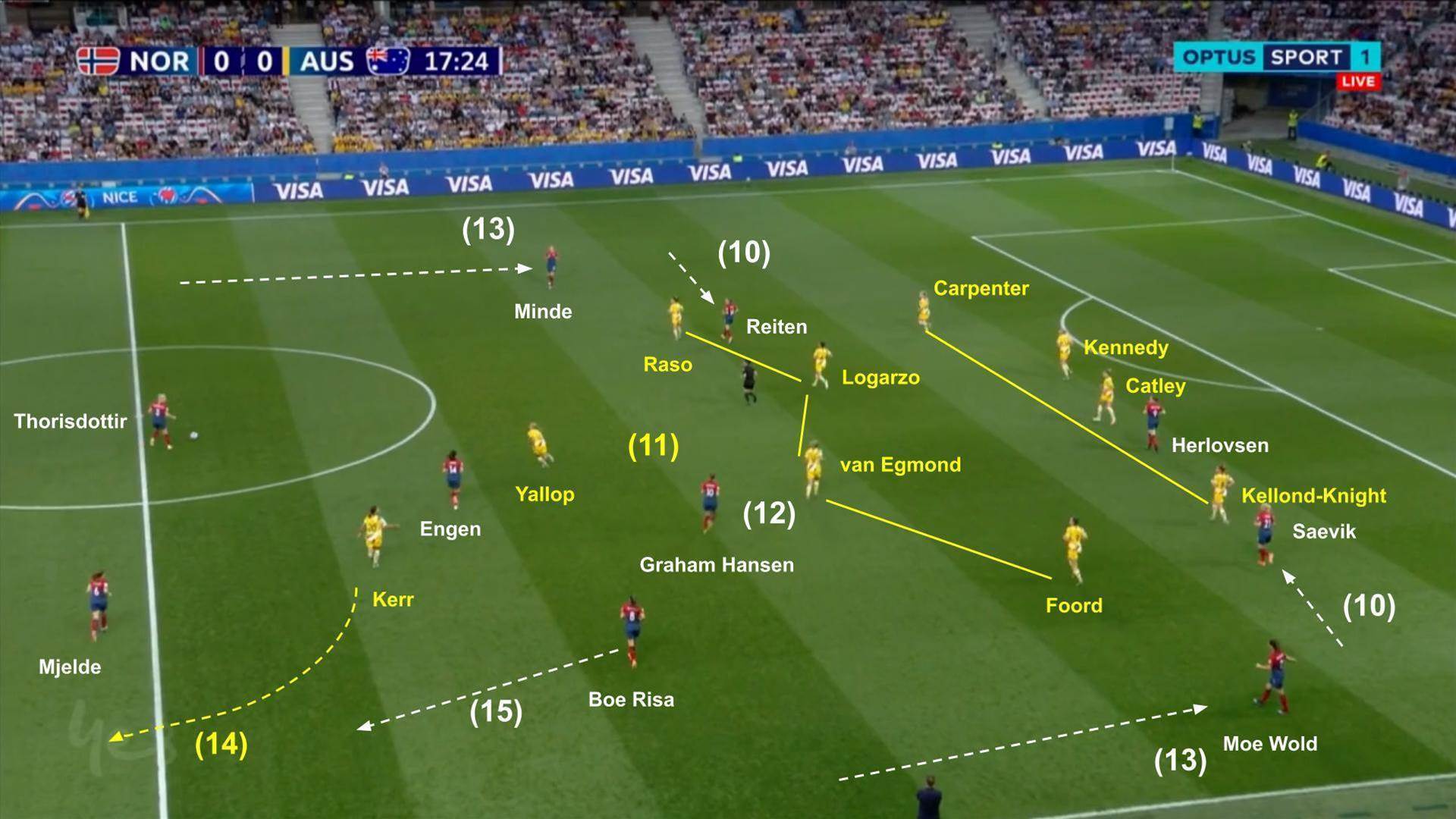 To maintain width, Norway pushed their fullbacks very high up (13). In particular, left back Minde was frequently seen in the penalty area attacking the far post in crossing situations. The flip side of Norway pushing both of their fullbacks forward simultaneously was that their centrebacks were left to cover the entire width of the pitch. As a result, Australia best chances came in transition moments when both Minde and Ingrid Moe Wold were caught upfield.

Kerr focused on exploiting the space outside the centrebacks, in particular Norway’s right-sided centre back Maren Mjelde (14). Kerr nearly scored after isolating Mjelde 1v1 in the opening 30 seconds, and again in the 5th minute. To mitigate this, Boe Risa would occasionally drop into the right-sided centre back position (15), leaving Engen as the sole central midfielder.

Australia have struggled to defend counterattacks throughout the tournament. Early talk on the topic focused on the high line, although this was misleading. Rather, Australia’s defenders have been caught out by indecision; specifically, when to press and when to drop.

This was evident from Norway’s first goal, shown below. Left back Elise Kellond-Knight went to press Moe Wold (16), leaving Saevik free to receive a pass. This left centrebacks Catley and Alanna Kennedy with a decision - hold the line to catch centre forward Isabell Herlovsen offside, or drop to defend the space.

However, Catley went to drop, while Kennedy went to hold. This is why Kennedy, as the covering defender, wasn’t in a position (17) to cover Catley’s subsequent misread of Saevik’s hopeful ball in behind (18). Note also how van Egmond is outnumbered 3v1 in central midfield, with Graham Hansen dropping in. 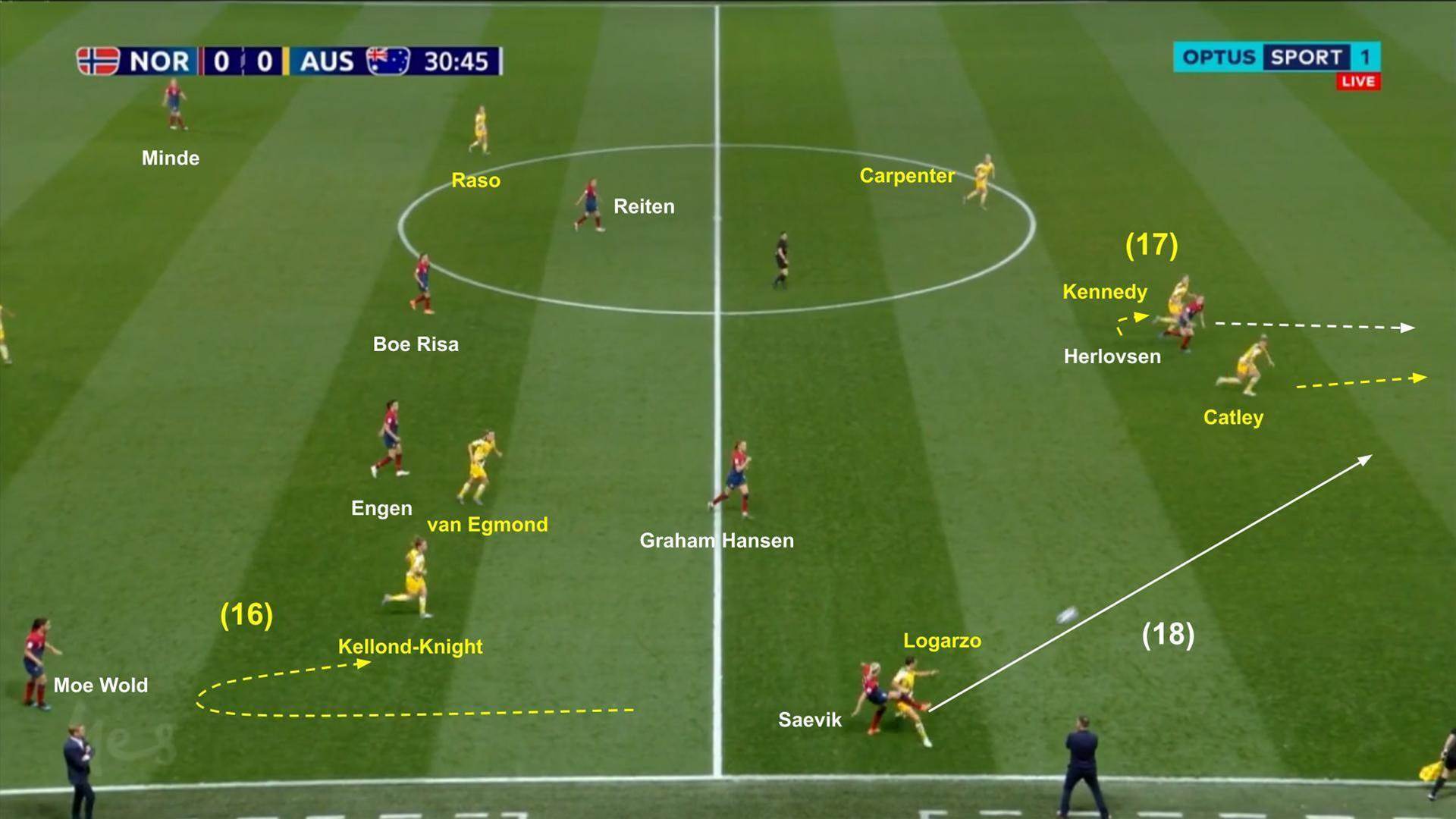 With Australia now 1-0 down and needing to be even more attacking, this left Kennedy even more exposed. Her 104th minute red card for pulling back substitute Lisa-Marie Utland, when judged to be the last defender on a Norwegian counterattack, emphasised this.