The Magpies have put themselves back on the winner’s circle after a 65-47 victory over the Thunderbirds and claimed all eight available premiership points.

Both teams came out firing from the first centre pass making for a physical and hard-fought first few minutes.

The Magpies were quick to capitalise on turnovers by feeding them into Shimona Nelson who shot at 92 per cent in the first term.

It was the Thunderbirds’ goal keeper Shamera Sterling and goal shooter Maria Folau who stood out for Adelaide in the second quarter. 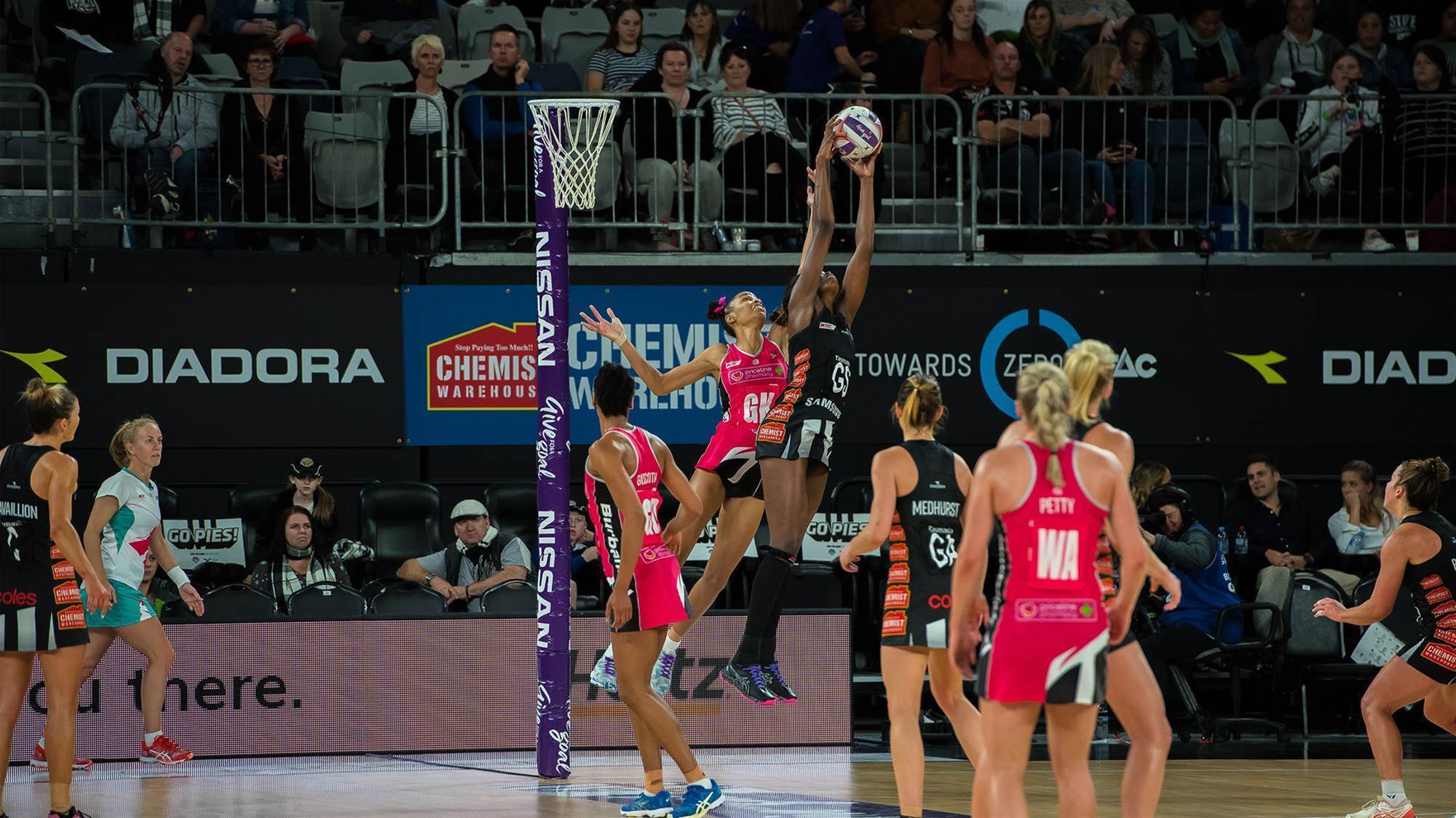 However, the away side struggled to get any flow in their attack end, making it difficult for midcourters Chelsea Pitman and Hannah Petty to feed into Folau and Sasha Glasgow.

Magpies defence in play by Geva Mentor and April Brandley only made it harder with their pressure and critical intercepts.

The Magpies’ swift transition out of defence was leaving the Thunderbirds looking for answers leading into half time.

The Thunderbirds continued to rotate their roster, struggling to lock in the perfect combinations particularly in defence with Nelson found alone under the post resulting in a 12-point lead.

Sterling was a shining light for the Thunderbirds throughout the match and with her record-equaling eight intercepts, she earned herself a Player of the Match nod.

The Lightning have come back from nine-goals down to beat the Swifts 59 to 57.

The undefeated Swifts and reigning Super Netball champions, Lightning, saw a fast and frenetic start to the match with both teams bringing intensity and physicality.

Karla Pretorius took a huge early intercept for the Lightning and her turnovers were capitalised on by Laura Scherian and Laura Langman who brought the ball cleanly out of defence.

Both team’s goal shooters Peace Proscovia and Sam Wallace, who had both been having incredible starts to the season, shot accurately in the first half.

It went goal-for-goal throughout the second quarter with the Swifts taking lead with five minutes to go with six consecutive goals. The young Swifts defence outfit of Sarah Klau, Maddy Turner and Kate Eddy continued to apply relentless pressure to the Lightning attack end.

The Lightning remained unchanged at the beginning of the third, but the Swifts mixed up their defence end – a move that paid dividends with the young team extending their lead out to nine.

The Swifts went on to take control of the match and the Lightning were forced to make changes up their attack end, bringing on Cara Koenen into goal shooter.

It was a hard-fought and physical last term, both teams were frantic and every loose ball was scrambled over.

The Lightning fought back and to bring the scores to level with five minutes to go and after a critical time-out the Lightning hit the lead and went on to control the rest of the match, claiming victory by two goals.

The Vixens and Fever have fought out for a spectacular draw with a Caitlin Thwaites buzzer-beater denying the Fever their first win of 2019.

The Fever opened their 2019 campaign with three big defeats so were looking to get that elusive win. They led by as many as five goals during the last quarter but couldn’t hang on, in a brave performance.

The two sides entered the last quarter with the scores level at 47-47, but it was the Fever who hit the ground running early in the final term, despite stand-in goal keeper Olivia Lewis being forced from the court with a calf complaint late in the third quarter. 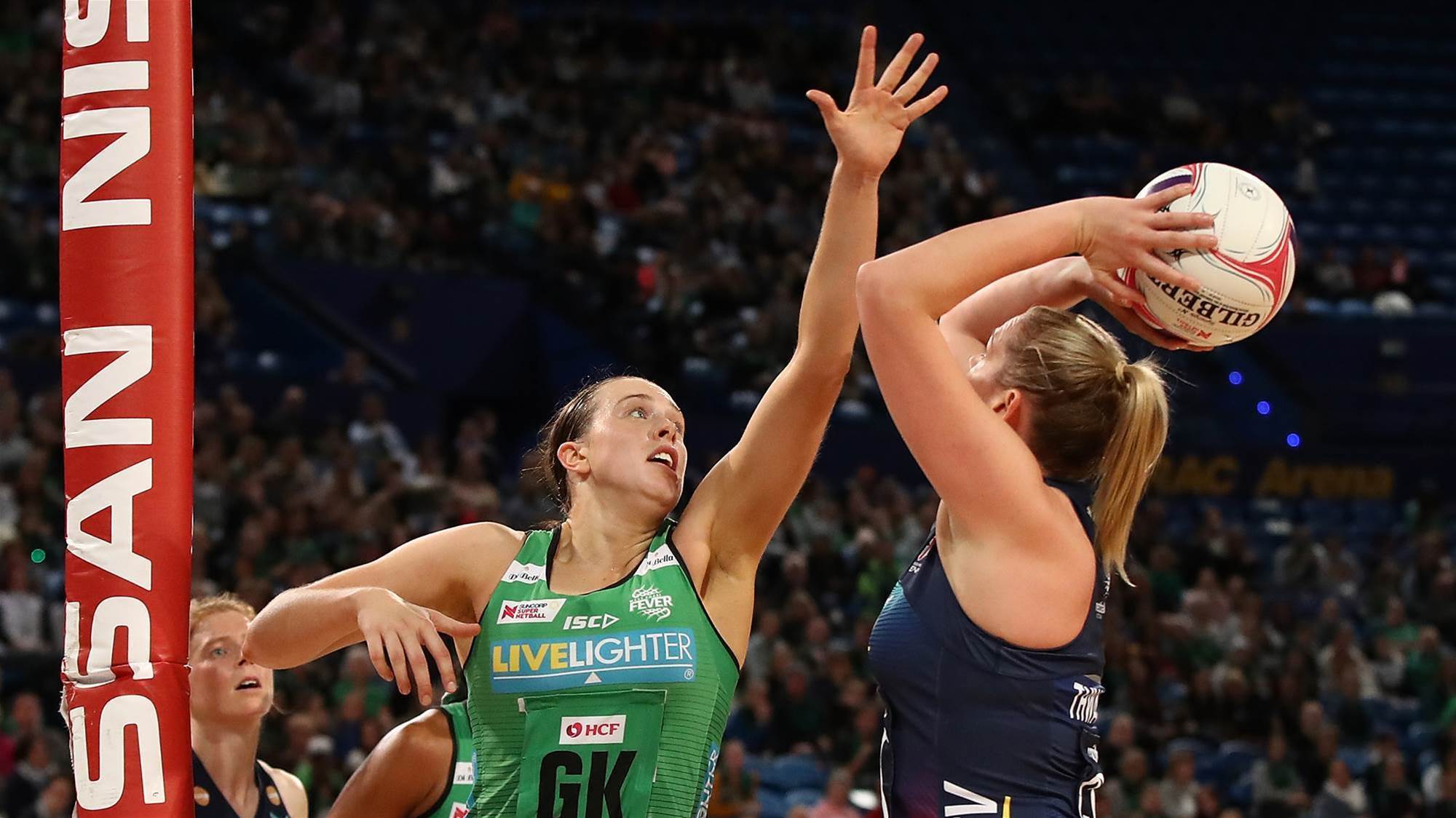 A Thwaites miss gave the Fever the edge, with their lead out to three goals with just over 10 minutes left on the clock, and when Liz Watson was called for a held ball inside the final six minutes, the Fever’s advantage was soon five.

The Vixens called a desperate timeout and were back in with a chance when Kadie-Ann Dehaney rebounded a Jhaniele Fowler miss, with a quick goal scored and then giving Tegan Philip reducing the margin to two.

It was then Watson who made amends for her earlier error, coming up with a deflection on a Fever centre pass to allow the Vixens to level the scores inside the last minute.

The Giants have won their second consecutive game after knocking off the  Firebirds 69-61. The loss for the Firebirds means they are only one of two sides who are yet to win a game this season.

It was a physical game from start to finish which suited the Giants style of play perfectly.

Both teams came out playing tentative netball early, resulting in turnovers and some ugly play going into the attacking circles.

Sam Poolman and Kristiana Manu’a had a physical mindset against Romelda Aiken and the Gretel Tippett and both team’s midcourts threw themselves at every contest.

Frantic end to the first quarter!@GIANTS_Netball take the bonus point.

The Giants burst out of the quarter time huddle and got to work extending their lead, upping their ball movement speed and tightening up their passing.

The team in Orange threatened to break the game open midway through the second quarter, but a late run by the Firebirds brought the margin back to just five-goals at the half-time break.

While the third quarter was tightly contested the Giants were able to steady late after some rock-solid defence through the centre by Jamie-Lee Price and Amy Parmenter.

Desperate to get something in front of their home crowd, the Firebirds came out hunting a bonus point in the final quarter.

However, despite another spectacular performance from Tippett they just couldn’t slow down the Giants.