The 2020 women's Indian Premier League will be held in November at the same time as the Women's Big Bash League|06.

The Board of Control for Cricket in India (BCCI) announced today that the four-team women's IPL would take place in the United Arab Emirates with the player's camp and tournament taking place at the same time as the WBBL.

The official announcement to schedule the T20 IPL women's event from the 1-10 of November, simultaneously to the WBBL's already announced competition to be held from the 17th of October to the 29th of November, has drawn heavy criticism:

What a huge shame for both the WBBL and WIPL competitions there is a clash.

Disappointing we wonâ€™t see any @BCCIWomen in the WBBL this year. Suppose you canâ€™t fit everyone in such a tight schedule over the next 12 months... https://t.co/WstoiqHxX1

This is just plain sad for both tournaments! Women's cricket needs Indian players in WBBL and Aus players in IPL!

Agree. If true, itâ€™s a shame... while the game continues to grow, premier domestic competitions do not need to compete against each other. They can be used to showcase the game and support its development around the world.

Part of the BCCI's reasoning for the intentional overlap was to adjust the women's IPL to occur at the tail end of this year's men's IPL, scheduled from September 19 to November 10.

Several Indian players were expected to participate in WBBL|06 including T20 captain Harmanpreet Kaur, Jemimah Rodrigues, and Smriit Mandhana.  The WBBL is in the process of signing players for the upcoming competition.

This overlap may impede the ability of both leagues to draw foreign talent, something Australian international Alyssa Healy pointed out on social media:

So the Indian players whoâ€™ve already signed wbbl contracts will do what? And all the international marquee players that will be in aus for wbbl? Good luck with it.....

India's women's team captain Mithali Raj, however, disagreed with the general sentiment, describing the plan as a good move:

The Bcci is gradually building towards having a full fledged womenâ€™s ipl in a few years with the franchise module. This is an ipl challenger of sorts( 4 teams) At this juncture itâ€™s important the building process is not halted thus itâ€™s a good move to have it alongside the menâ€™s 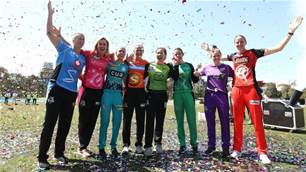