Football Victoria believes the first stage of their Home of the Matildas could be complete before Australia and New Zealand potentially host the Women's World Cup in 2023. 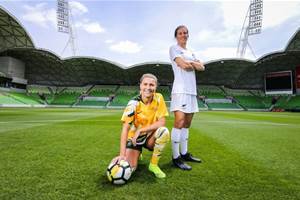 It followed news on Tuesday that Brazil had abandoned their efforts to host the tournament, leaving bids from Japan and Colombia as the only remaining roadblocks.

While the Home of the Matildas isn't tied to the success of the WWC bid, the proposed project would more likely twin support if the "As One" bid succeeds.

In the lead into the 2019 election, FV received a $15m commitment from the Federal Government towards the project and a State Government-funded feasibility study was submitted for Victoria's October budget.

Despite this momentum, however, a recent report from The Sydney Morning Herald revealed  the FFA was set to lobby for a facility in Sydney that would become a permanent home for the Socceroos and the Matildas.

The FFA were said to be petitioning the NSW government to use part of $810m saved from abandoning the ANZ Stadium redevelopment to use for a new home of football.

Speaking to FTBL, CEO Peter Filopoulos bristled at the possibility that Victoria could miss out on the future home base of Australia’s most popular team to its northern neighbours.

And he detailed how plans were afoot to have the first phase of construction of a Victorian home completed ahead of a potential 2023 World Cup in Australia and New Zealand.

“The home of the Matildas project is one we’ve been working on for two years,” Filopoulos said.

“We’ve got support from the Federal Government and currently we’ve got a feasibility study in with the State Government for budget commitment this October.

“We’re almost down to selecting the site with a view of starting construction in 2021 and having phase one finished by 2023. Phase one will be a $45m project and the second phase will start sometime after its completion and the end project will be a $90m, world-class national training centre.

“[FFA] chairman Chris Nikou, the board and James Johnson are fully supportive of this project. We’ve got a very supportive Victorian state government who are right behind this project and so is the federal government.

“It’s natural to think that a NSW government would look at this and try to spoil the party for Victoria. Hence why I thought it was important that we stake our claim to it and make sure NSW knows that this project is well in advance.

“For me, this project will be a landmark asset for Australian football and an example of what we need in every capital city in Australia. Our vision is that it will be a centre of excellence of women’s football: our talent development pathways, the Matildas themselves, the Young Matildas, and the Junior Matildas.