Former Matildas coach Steve Darby has given insights into the history of fighting for female coaches in Australia, while urging FFA and Australian football fans to support the next Matildas coach regardless of gender.

Darby, who was the Matildas coach from 1989-91, weighed in on the biggest debate in Australian football circles now.

"Who should be the next Matildas Coach for 2023? I believe that all that matters at World Cup level is winning," said Darby, who was Australia's Technical Director at the 1995 World Cup in Sweden.

"Forget all those trendy words of philosophy, style or project. The only thing that matters at this level is winning games. In that sense I don't care who the coach is.

"The person who gives the team the best opportunity to win should be hired and not only hired but supported in every way.

Darby also encouraged FFA to develop a professional approach to the handling of the next Matildas coach, especially after the turbulent 18 months following Alen Stajcic's sacking. He also bemoaned the cloak and dagger approach employed by some in football circles, especially with regards to coaches.

"I didn't know Alen Stajic personally but I thought the way in which he was dismissed and treated as a professional was appalling and it will leave many of the top coaches wary," he said.

"Especially the ones who don’t either need the job or the money but would be the target market to be the next coach.

"The game is full of gossip, so often its wise to only listen to people you professionally trust. As an outsider I was impressed at the World Cup with the French and the Dutch Coaches, and of course the current New Zealand coach Tom Sermani, who did a fantastic job with the Matildas and won the Asian Cup."

Darby was full of praise for the many women who are coaching around the world, but wanted Australia to get the best coach available for 2023, be they a man or a woman.

"In the UK where I am based, Emma Hayes of Chelsea has a great reputation. There are also some excellent Japanese coaches in their women's system. But language is a vital factor at this level.

"In Australia I have heard good things about Heather Garriock who has developed from being a wild kid to a winning coach.

"The main thing is get the best person. The World Cup is a unique opportunity, the female game is rightly booming and if this team wins in 2023 then players like Carpenter, Kerr and Van Egmond can not only become well paid professionals but hopefully will lead to many young Aussie females wanting to emulate them.

"Its a very important decision and must be made by football people not some corporate head hunters who have no idea about the realities of the game. From experience I believe players want someone who cares about them as a person and can improve them. But they also want someone who is the boss, who makes decisions based on what is best for the team. It’s a team game, never forget that."

Darby, who has coached for over 40 years and was in charge of the Vietnam Women's team when they won the country’s first ever SE Asian Games Gold medal in 2001, also dismissed the common theory that men and women should be treated differently when coaching.

"I honestly believe you coach the person first, then the player. So my approach to coaching was that gender was irrelevant but the person was what mattered, be it male or female," he said.

"Ranging from an 18-year-old girl from Albury to a 28-year-old male Egyptian International through to Nikolas Anelka. So I think anyone that says coaching women is different from men is wrong, its not that simple and once you start saying things like that, cliched generalisations come into play. I've coached men and women who were “as hard as nails” or were “cheats” or were “emotional” and most of all I've coached men and women who were 'great pros'.

Darby was 100% behind eventually having a woman as head coach of the Matildas, as a pioneer of developing women's coaches since his time with the Australian Soccer Federation in the 1990s.

"When I was national coach in 1990 I conducted an ASF (FFA) Level Two coaching course for elite females at the AIS in Canberra. The same principle as Ron Smith had conducted for elite males which I had helped staff.

"The idea was not only to educate female footballers who often had limited coaching when they returned to their clubs but to also give females the opportunity to coach. The key word was opportunity. They would stand or fall on their ability after the opportunity.

"I must add that some of the players were excellent coaches and the aim was to try to get them apprenticed to national coaches to establish a pathway to eventually have a female Australian National Coach.

"Sadly administrative politics as usual never allowed that pathway to be created and the opportunity was to an extent lost for that era of great players. I did the same thing in Vietnam in 2001 and now the Vietnamese Women's program is filled with players from my squad either as coaches or administrators. Not every player, as that is the real world, but again the word 'opportunity' comes to mind.

"It was a different political time in 1990, and many battles had to be fought to get money - it does matter - exposure and public acceptance for the players.

"I've found this worldwide. Players such as Peter Reid and Bryan Robson had similar views - it's usually the bloke in the pub who played for his school team who criticises top females.

"When I was Development Manager for the ASF 1990-95 I took the view that “her” dollar was as good as “his” dollar and that the numbers of players was going to be political and hence an economic power for football.

"So I encouraged all posters and promotions to have females in them, so that the language used was gender neutral where feasible. I didn’t always win, and even received criticism from female administrators. But it was a start."

Assessing the Matildas' Milicic era with one eye on 2023 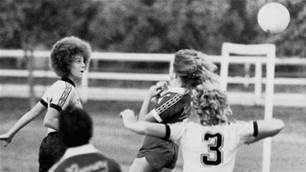 How the Matildas became 'strong confident women without any support'