An independent review of the national teams' structure was set up by the FFA to look into the causes that led to Stajcic's sudden dismissal almost year ago, just six months out from the Women's World Cup.

But its terms of references prevented the review panel from speaking to anyone not employed by the FFA - which included Stajcic himself, and may also have included key FFA management figures.

The head of women's sport Emma Highwood had also already announced her intention to leave the FFA when the review was launched, as had the head of high performance Luke Casserly.

The FFA today refused to say who the panel had been able to interview on the grounds of confidentiality but admitted it had included some internal and external to the FFA, despite the terms of reference apparently prohibiting that.

Former NSL and Sydney FC general manager and ex-interim Football NSW CEO Stefan Kamasz was one of those denied a chance to give any input to the review despite claiming to have critical evidence.

"I and others have incriminating information and were not entitled to provide evidence under the ToR," he tweeted this afternoon.

"Even Stajcic wasn’t interviewed. An absolute whitewash. Zero credibility. An absolute disgrace. They should be ashamed as should Congress for inaction." 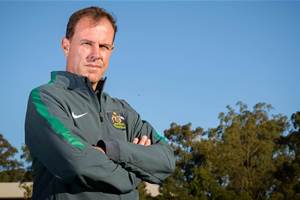 Alen Stajcic may be banned from being part of the review into how he came to be sacked as Matildas coach, Football Coaches Australia revealed today.

Kamasz told FTBL: "The outcome of the report was in my view expected given the limited ToR which protected certain people at all levels.

"If the Congress accepts this report without question then it is delinquent in its responsibilities. This is an even blacker day for football.

"This board was elected, among other things, on a platform of transparency and has again failed significantly in that area."

The role of Heather Reid in the decision to axe Alen Stajcic comes in for close scrutiny from the review panel without actually naming her.

Reid stood down from her newly-elected post as deputy chair of the FFA board for health reasons after a row blew up about her allegedly briefing certain journalists and using social media to undermine Stajcic. She later issued a formal apology to Stajcic for her conduct.

Accusations were also aired about Stajcic being the victim of a campaign by a so-called "lesbian mafia" but the review said they found no evidence of a "formal 'lesbian mafia'", they said, or any evidence of a personal agenda being behind Stajcic's sacking.

"The Panel has not been able to find evidence that the FFA took any proportionate action to address the issue nor protect the individuals who were the target of this speculation."