The Women’s Game spoke to New South Wales captain Ruan Sims alongside her Blues and Jillaroos teammate Samaima Taufa ahead of next month’s standalone Women’s State of Origin match at North Sydney Oval.

It’s never been a more exciting time for women’s rugby league players with the inaugural NRL Women's Premiership ahead. Players can transfer from other sports and there are pathways in place for the younger players coming through.

While Origin teams aren’t set in stone and players who shine at next months six-team women’s national tournament could push their claims for a spot.

“We’ve got national championships on the Gold Coast and that’s three games in three days, so that is a lot of football to be played.

“A lot of form you’ve got to show over an extended period of time and show you can back-up and recover," she said.

The women’s inaugural Origin match will also kick-off the men’s representative programme including the Pacific Island Test matches and both Sims and Taufa are excited to be playing for a packed house in front of the North Sydney faithful.

Friendships, relationships and possibly even sisterly bonds - Ruan will go head to head against younger sister CJ who will line-up for Queensland if selected - will be put aside for the duration of the State of Origin match.

Sims’ younger teammate Taufa, who at age 24 loves Origin and the physicality of it all, can’t wait for the date to come around, but like Sims she’s aware she has to go through the process to be assured of selection.

Both women are aware even though NSW has won the last two interstate clashes following on from a draw in 2015, that Queensland formidably won 16 matches in a row with Queensland legends.

The same legends Sims paid homage to - Karen Murphy, Nat Dwyer and Tahnee Norris among others and she thinks this Queensland team will display that same dogged determination as those predecessors she speaks so highly of.

This should ensure one helluva game before a packed house at North Sydney Oval.

Morri: The final roll of the dice for Paradise Palms 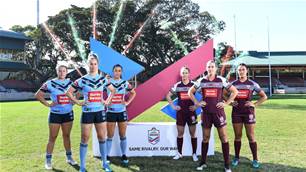