Kyah Simon is creating some very interesting problems for a new Matildas coach.

The striker is smashing goals for PSV Eindhoven in the more traditional role that built her career, becoming one of the Eredivisie Vrouwen's most lethal forwards this season.

It serves a reminder that while the Matildas are blessed with attacking options, they don't have anyone quite like her.

Simon told the Matildas website that she's relishing her more familiar position, despite her recent forays into midfield for the national team under Ante Milicic.

“It's quite refreshing,” Simon said.

"I'm actually playing up front here for PSV so that's been really nice and given me almost a new lease on playing again, and just feeling like an out and out striker again which I haven't had for a few years now. So that's made me excited."

“It's only been the last few years I would say that I've transitioned a little bit more into that 10 role. I still don't have a preference, but I think deep down I enjoy being a striker.  I think that's really where I belong only because I've played so many of my younger years in that position.”

They're diplomatic comments, but ones that leave no doubt as to where Simon prefers to play. Read between the lines here and you get the sense she's very keen to return to striking indeed.

Given Australia's focus on pace - with Kerr's combination of assets especially vital to the Matildas in recent years - Simon's re-inclusion into the national team midfield has so far been a pleasant experiment.

With Simon so adequately fulfilling the Matildas' search for an experienced attacking midfield playmaker to pull the strings, Simon's chances of slipping back into the number nine under Milicic appeared slim.

But her prolific form in front of goal and standout performances for the national team do pose the question: could the Matildas still evolve their style of play into a more rounded, versatile outfit with her as a traditional number nine?

Could she potentially offer the Matildas a different style of play, one they've lacked for some time, as a more traditional ball-holding number nine who can bring players into the game.

The one remaining issue with Simon as a striker is the reason she was drawn back in the first place, Australia's lack of attacking midfielders. Emily van Egmond has been sensational in a similar role, so that leaves the prospect of offering her greater responsibility an enticing one.

But you get the sense if there is one position that a new Matildas coach will be looking to try out new players in, it's that one. Alex Chidiac's return from injury immediately springs to mind.

With the Matildas pace-driven counterattacking style becoming a tad predictable at times, and arguably ineffectual against some lower ranked opposition during Milicic's tenure, Simon will no doubt be excited to put these qualities to the test.

Right now for anyone watching her in PSV colours, the potential is exciting to say the least. 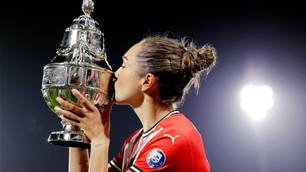 Conflicted Matilda exits Dutch giants after 'everything you can imagine'