Knowing a World Cup qualification spot is on the line in tonight’s Asian Cup game against Japan has the Matildas filled with extra motivation and determination, says star striker Kyah Simon.

Australia have it all to play for when they face Japan in tonight's third Asian Cup group game.

A win or a draw against their Asian rivals will see the Matildas secure a spot at next year’s Women’s World Cup in France as well as make the semi-final of Asia’s biggest tournament.

With 80 caps, Simon is one of the more experienced member of the Matildas squad having played at numerous major tournaments.

But despite her pedigree the 26-year-old still has great respect for the massive moment that awaits the Matildas.

“To know that we could potentially seal a World Cup berth by getting a result in today’s game is special and an honour if we were to make that happen,” she said.

“Any time I get the chance to represent our country I don’t take it lightly and I wear the jersey with pride as well.

“Obviously there is loads of excitement and a special moment as well knowing what’s on the line, it brings an extra bit of motivation and determination for us to know that we can book that spot in tomorrow.”

Simon was a key figure when the Matildas won the Asian Cup in 2010 with her penalty securing victory over North Korea in the final and in the process handing Australian football their first major silverware.

Looking back at that time the importance of that moment has become even stronger for Simon.

“In 2010, as an 18-year-old I don’t think I really realised the significance of the tournament,” she said.

“Looking at it now I’ve got a new-found appreciation for that as I’ve had a fair few international games from that point.

“Our squad as a whole is more experienced for big tournaments and obviously we know the significance of this type of tournament.

“We are going out there to play our best football and we know what’s at stake, but we aren’t putting too much pressure on ourselves going into it.”

After missing out against South Korea in the first group game Simon got on the score sheet for Australia in the 8-0 win against Vietnam.

The striker said that putting the ball in the back of the net will be a key aspect for the Matildas against Japan.

“Scoring goals is the main one,” she said. “We’d like to get on top of them in that aspect.

“They are technically good, but we need to be defensively sound and also finish our chances and create some goal scoring opportunities and try and make it as physical and a competitive game as possible.

“Obviously, we know what’s on the line. We want to qualify for France 2019 and that’s one goal and we also want to go into the game and come away with a win.

“There is no extra added pressure from our perspective. We are just approaching it knowing Japan’s strengths but also knowing our game plan and executing that as well as possible to ensure the best possibility to come away with the win.” 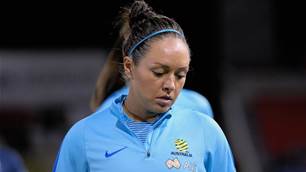 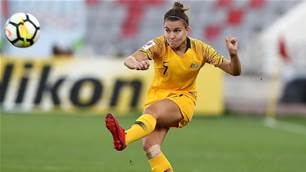 Catley: World Cup will prove Matildas can be the best