The English Football Association came to its decision today about the conclusion of the FA Women's Super League and Women's Championship after their respective seasons were curtailed due to the COVID-19 pandemic.

The Football Association board reached a majority decision on Friday, June 5, to award FA Women's Super League and Women's Championship positions based on a points-per-game basis.

Using this calculation Chelsea FC, and in turn Sam Kerr, were awarded the FAWSL title.  The undefeated London team beat runners up Manchester City with a points-per-game of 2.6 to City's 2.5.

One player who will miss out in the 2020-21 Champions League competition is new Arsenal FC addition Caitlin Foord and fellow-Australian Arsenal's head coach Joe Montemurro.  Arsenal finished third with a points-per-game average of 2.4.

Foord and Montemurro may still see Champions League action though.  Late last month it was announced that UEFA was considering completing the current 2019-20 Champions League season in August and September.  Arsenal were due to meet PSG Féminies in the quarter-finals.

Both Foord and Kerr, as well as Hayley Raso who plays with Everton FC, also have a chance to finish and win this year's FA Cup.  The resolution of the 2019-20 Women's FA Cup, also at the quarter-final stage, is still under review by the FA Board.  A decision is expected later this month.

In its decision, the FA also relegated Liverpool FC to the FA Women's Championship.  Liverpool had amassed just 6 points in 14 matches played this season, getting just one win.  Its points-per-game average was 0.43.

Aston Villa was promoted to the FAWSL.  The club had amassed 40 points in 14 games, winning all but one match, and finishing with a points-per-game average of 2.86.

FA Director of the Women's Professional Game Kelly Simmons stated when the FA released its decision:

I would like to thank the clubs for their ongoing collaboration and support throughout this period. They have played a crucial role in helping to shape the decision-making process, with the welfare of the players and clubs first and foremost.

"I would also like to congratulate the players, coaches and staff of Chelsea and Aston Villa. Although the 2019-20 season has been prematurely curtailed, it has been a hard-fought campaign and their success is well deserved, with the outcome based on sporting merit.

"Women’s football has made huge strides in recent years, and the FA has been at the forefront of investment and support to help grow women’s football at every level of the game. Our commitment to the women’s game is unwavering and we will continue to work closely with the clubs to ensure we come back even stronger for the 2020-21 campaign."

The decision was made after a full consultation process with all clubs involved. 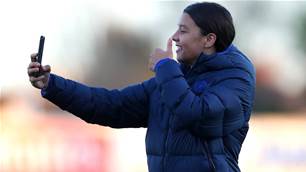