The A-League was easily the most popular among those who responded to the survey, with 40.7 percent of the vote, surprisingly outstripping the EPL which managed a healthy 32.13 percent.

Socceroos and Matildas came third with almost 13 percent of the vote, but the remaining options fairly evenly shared the rest of the vote.

Just 0.8 percent of those who responded said they only played the game socially or for exercise.

However the story changed when fans were asked what leagues their club team-mates followed.

Almost 15 percent of them were said to only play football socially or for exercise, while 83 percent were said to follow the EPL, the overwhelming favourite among team-mates.

A-League still held up well though, with 71.41 percent backing among club mates, and likewise the Socceroos and Matildas with 63.09 percent.

Again though, after that, most of the other leagues shared the vote fairly evenly with only the Scottish Premiership lagging slightly behind on 18.91 percent.

Finally, on the international scene, fans admitted they had been disappointed by the Socceroos defence of their crown at the Asian Cup which saw them exit at the quarter finals after a 1-0 defeat to United Arab Emirates.

More than half (55.93 percent) reckoned the team did worse than expected, another 41.54 percent felt they had performed to expectations – while 2.53 percent thought they had done better than expected. 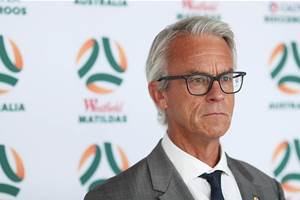 Football Federation Australia has been judged by football fans in the new Big Australian FTBL Survey – and overwhelmingly failed.

That was compared to almost two-thirds (64.45 percent) who felt the Socceroos had lived up to expectations by failing to qualify from the group stage of the World Cup in Russia last year. Almost nine percent actually felt the World Cup went better than expected, while around a quarter (26.9 percent) thought it was a disappointment.

However the excitement is palpable for the Matildas at the World Cup in France this year.

A whopping 79.36 percent said they will be glued to the screens in June to watch the Aussie women take on the world as one of the favourites for the world title.

Despite all the furore over the sacking of Alen Stajcic, Aussie football fans are excited by the prospect of the Matildas taking on the world and are right behind the team, with just seven percent saying they're not interested, and another 13 percent yet to make up their mind.