If one was discussing the great St George football teams who won multiple titles in a row, you could easily be forgiven for thinking they were talking about the all conquering St George Dragons rugby league team, who won a staggering 11 NSWRL premierships in a row from 1956-1966.

However, there is another team from that part of Sydney who were equally as dominant, if not more so.

Not only did they win title after title, but most of the players represented NSW and won National Championships as well. Many were even part of the original Australian women’s team, who played in the 1975 AFC Women’s Championships and came third.

Captained by the legendary Pat O’Connor and coached by her husband Joe, the St George team dominated the NSW league with stars and future Hall of Famers such as Cindy Heydon, Julie Dolan, Kim Coates and Trixie Tagg to name a few. O’Connor herself won the Golden Boot every year she played.

The bulk of the team started out playing for Sydney Prague in 1967, commencing their run by winning three titles in a row. In 1971, the O’Connor’s and their team moved to St George Budapest. For the next seven years playing under the famous St George badge, the ladies ruled the roost. In one season, 1972, they scored 206 goals and conceded none as they stormed to the title.

When also factoring in their time at Prague, the ladies won a remarkable 10 titles in a row much, a dynasty to match the legendary St George Rugby League teams.

Heydon, who made her senior St George debut at the tender age of 10, recalls fondly her time in the famous jumper.

“I was proud and honoured to have met and played in that team, who were an outstanding bunch of women and players,” remembers Heydon. “At 10-years-old standing in the lineup, I would look at the other team we were about to play and all I could think of was, you gals are about to get one hell of a whooping, and that went on for years.”

Heydon, who went on to play 23 internationals for Australia and was part of the first official Australian team in 1979, admits her time at St George set her on the path to a Hall Of Fame career (inducted in 2002).

“As a footballer, the club taught me the game, comradery, respect, and through it all, how to have fun and enjoy the game.

“We were way ahead of our time and the skills levels were second to none.

“They opened so many doors for women’s soccer in this country, and for me Pat and Joe Oconnor are the Godmother and Godfather of our game, and deserve to be honoured for everything they did and achieved.”

Tagg, who played for Prague and St George, was full of praise for the support provided by the men at the clubs they played for.

“The men's teams at Prague and St George were very supportive,” she recalls. “A group of us girls and Joe went and supported the men's teams, especially when they played at their home grounds.

“We were quite vocal at times, we even had a special chant for the referees.

“We were made welcome by players and coaching staff from both clubs. A few players would watch us play in curtain-raisers (Jim Fraser, George Harris) and some would offer suggestions on how to improve (Dave Zeman).

While all of the ladies of that great Sydney Prague/St George dynasty are long retired, history should recognise a team that set the standard for women’s football. 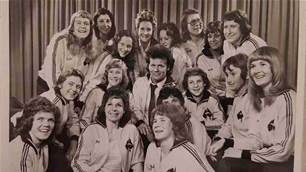