China's best female footballers have been forced to train in hotel corridors ahead of their Olympic qualifying opener in Sydney on Friday.

The team has been in isolation at a Brisbane CBD hotel since their arrival in Australia last week due to strict protocols in response to the coronavirus outbreak.

Their quarantine does not end until Wednesday, meaning the 32 players and staff have been unable to leave their hotel during the past week.

Photos of the team stretching on towels in hotel corridors were published by Chinese sports media group Titan Sports on Twitter.

It's understood the team, which has shown no signs of the deadly virus, will arrive in Sydney on Thursday before taking on Thailand in their opening match at Campbelltown Sports Stadium on Friday.

They then face Taiwan on Monday and the Matildas next Wednesday.

The team was placed in quarantine due to having trained in Wuhan - the epicentre of the outbreak - within 14 days of their arrival in Australia.

The virus has played havoc with the qualifying tournament which has been relocated from Wuhan and Nanjing and then Sydney.

Officials have had to adjust the match schedules as well to enable the Chinese to compete.

Several players, including experienced star Wang Shuang, were unable to travel to Australia having returned to Wuhan for Chinese New Year celebrations before the city was placed into lockdown.

While her teammates trained in a Brisbane hotel hallway, footage has emerged of Wang kicking a ball with her brother on a rooftop due to being unable to visit a football pitch in her hometown. 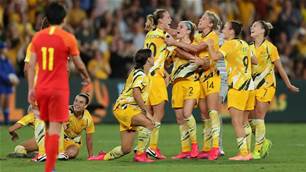