The restructure of female football in Victoria has caused plenty of drama, however some have welcomed the change.

Alamein defender Jess Tay is open to the idea of the NPLW having a second tier and promotion/relegation.
The FV announced earlier this month there would be a new division interposed between the NPLW and State League One. The new tier called the Victorian Premier League Women (VPLW) will start in 2020 and feature 10 teams.
Tay, who played in two grand finals for Galaxy United, sees the value in there being two divisions of elite level female football namely giving opportunities for lower tier clubs.
“There are some very decent State One teams that should be given the opportunity to play in the highest league,” said Tay. “Teams and players that perform well should be rewarded.
“It also provides more competition and quality if there is the opportunity for promotion and relegation, it means there are consequences for teams who don’t perform giving them an incentive to do better.
Tay’s former club Galaxy were given the chop from the top tier last month along with Southern United. Both clubs are set to play in the new VPLW competition.
There was much uproar initially when the only two regional clubs were cut from senior NPLW football, however there have been many football insiders who have applauded the move, pointing out that too many teams in the top tier dilutes the quality.
Whilst at this stage there is no decision as to whether the NPLW and VPLW will have promotion/relegation after 2020, Tay feels it could be a positive move and enhance the competition in the top division
“Promotion and relegation adds excitement to the NPLW top division as well and leads to more meaningful games,” she said.
The criterion for getting into the NPLW is quite strict, with clubs required to comply with minimum coaching and facility requirements.
This means clubs like Melbourne University, a powerful State League club, would struggle. On the other hand, cashed up clubs like Preston Lions would have a better chance.
Therefore on field results alone won’t be the sole factor in determining which teams go up. This makes it hard to have a genuine promotion and relegation system.
Added to this is the fact other clubs in the Geelong (Galaxy) and Frankston/Dandenong (Southern) regions are looking at bidding for NPLW in 2021. This means Galaxy and Southern may well be competing off the field as well as on it to get back to the NPLW. 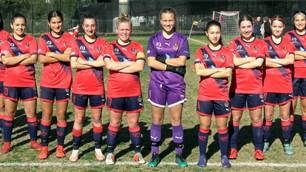