Just as Bobby Despotovski began to see a glimmer of hope in Perth Glory's season, now he has to "play against the Matildas".

After a shattering start to the season, with last season's Grand Finalists losing all three of their opening matches, there was room for cautious optimism in Perth's 1-1 draw with Canberra last weekend.

Canberra have proven themselves to be deadly competitors - albeit inconsistently - and the Glory's stubborn resilience and defensive fortitude suggested that perhaps all is not lost in the west.

However, judging by the tone of Despotovski's preview to Perth's upcoming encounter against Melbourne City, he isn't exactly relishing their next challenge.

"On Thursday we have to play against the Matildas - the Melbourne City Matildas," Despotovski said.

"They have nine members of the national squad, I believe, but we will go over there and give it a red-hot go.

"It's a completely different ball game to last week, but we have no pressure on us and absolutely nothing to fear." 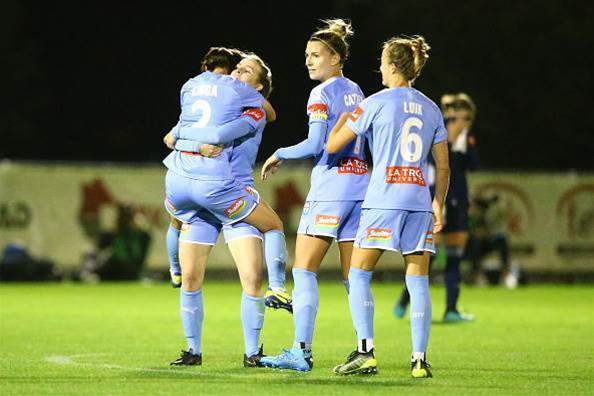 Perth now face the competition's pre-eminent force, a City squad packed with not only Matildas but a host of equally impressive foreign talent.

Serbian star Milica Mijatovic has proven to be one of the competition's most underrated signings this season and Yukari Kinga, now a familiar face to W-League fans, seems to be denying age in another sensational season across all positions.

City have four wins and one draw from their opening five matches, but they've all been by one-goal margins and Rado Vidosic's side are yet to truly unleash their attacking impetus on a struggling W-League side.

As City defender Rebekah Stott insinuated, Perth are the final piece in City's mid-season battle to quash the dire memories from their last campaign.

"We've beaten both last season's premiers and champions, but we're really eager to build on that momentum and continue our strong start to the season."

If Perth prove to be that team, it could completely derail the Glory's season before it ever really began. But if a defence that was so highly rated last campaign, spearheaded by the likes of Kim Carroll and Natasha Rigby, can hold out against City then it could prove quite the opposite.

Perth were clearly more than a one-woman team last season and their import signings over the break - while they were made late in the campaign - are arguably of a higher standard than their form has suggested.

As Despotovski says, continual improvement now is a necessity. The coach has now had time to mould his tactical approach to fit the new (and renewed) weapons in his arsenal.

With or without Sam Kerr, a whitewash over this season isn't acceptable for a squad that still boasts this talent.

"Just believe in the process and give 150% - that's all we ask of the players," Despotovski said.

"If you go into the changing rooms, one of my messages on the wall says always improve upon last week's performance.

"If you go in with that mentality, you're always going to find some little bit of energy within you to improve on the last week."