Australian all-rounder Ellyse Perry made history as her side put on a clinic performance against England in their second T20I win.

During the game, Perry added a new record to her name after becoming the first player, female or male, to take more than 100 wickets and score more than 1,000 runs in T20I.

Ellyse Perry has gone where no player - male or female - has gone before her! #Ashes #WATCHME pic.twitter.com/knGLaVAH14

The 28-year-old notched up the record during her unbeaten 47 not out.

After the match, Perry, who was named Player of the Match, was told of the milestone by media but the Wahroonga native was not aware of the personal achievement.

However, the ever-humble Perry pointed to the number of games she has played for the reason why she had gone where no other cricket has before.

"I think in T20 cricket, at an international level, we probably play it as much as the men so I've played a pretty big volume of games now, over 100," she said.

"I suppose when you play that many games you might get close to it so it's probably the only reason I'm there."

Perry (1-17) made sure Australia got off to the perfect start with opener Amy Jones departing on just the second ball of the game Jess Jonassen claimed the sides second wicket just three overs later to remove Danni Wyatt for nine.

Tammy Beaumont took to the Australian attack however, reaching 43 being bowled by Jonassen while fellow spinner Georgia Wareham claimed the key wickets of Natalie Sciver and Heather Knight.

Australia continued to take wickets at regular intervals, restricting England to 8-121 from its 20 overs.

Opener Alyssa Healy (20) got Australia off to a fast start with the bat before being caught off a Katherine Brunt bouncer with fellow opener Beth Mooney (9) falling cheaply and Ash Gardner (1) following suit.

The experienced duo of Meg Lanning (43*) and Perry steadied the ship as the pair combined for an 87 run partnership to steer Australia to victory.

Australia now leads the series 12-2 with the third T20I and final match of the series being played on Wednesday in Bristol. 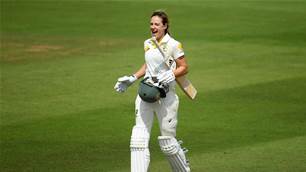 Another Test century for Ellyse Perry