It's typical in State of Origin that mate faces mate, teammates become enemies and families are pitted against each other but for Vanessa Foliaki and Karina Brown it becomes a much more hostile ground.

Brown, who is the Queensland captain, is looking forward to the clash.

"My partner actually plays for New South Wales, you can imagine in our house it's very hostile leading into it," she said.

"Certainly during the week we don't talk to each other but depending on the results and what happens the week after, it is a bit different," Brown added

Based in the Sunshine State, the couple and Jillaroos teammates will face each other in the inaugural Women's State of Origin match on June 22 at North Sydney Oval.

The pair started dating in November 2015 after meeting in the Jillaroos camp at the end of 2014.

NSW back-rower Foliaki Blues jersey is currently hanging right next to the TV in their living room, a taunting reminder of the Maroons defeats over the past two years. It comes after 17 years of dominance from Queensland in the Women's Interstate Challenge as it was known previously.

It will be the fourth time Foliaki and Brown face each in the maroon and blue.

Brown and Foliaki won't be the only battle on the field as NSW captain Ruan Sims will face younger sister Canecia.

CJ, as she was affectionately nicknamed from her gridiron days in the US, qualifies to play for Queensland after playing her first senior match in the state like her brother Korbin. 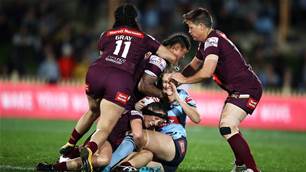 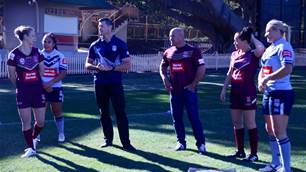 Behind the scenes: Women's State of Origin media opportunity