The New Zealand international confirmed via Instagram she has stage three Hodgkin's lymphoma, having returned to Australia last month from England where she'd been with playing for FA Women's Super League side Brighton & Hove Albion.

"I was actually in quarantine when I got the results that I had been diagnosed with Hodgkin's lymphoma," Stott said.

"I was kind of just glad to know exactly what it is and be like, okay, now I can try and deal with it."

The 27-year-old, who has made 71 appearances for the Football Ferns, won three W-League championships with Melbourne City in 2016, 2017 and 2018 and has also appeared for Melbourne Victory and Brisbane Roar during her career.

Stott will undergo chemotherapy over the coming months, pledging to fight the cancer as her treatment begins.

"I know it's not going to be easy but I really want to go through this with a positive attitude and try and encourage and inspire others to be able to do the same," she said.

Several Matildas stars were quick to offer their support to Stott via her Instagram post with Steph Catley, Caitlin Foord and Sam Kerr among those to send their best wishes.

Stott represented Australia at youth level before representing the country of her birth at senior level, playing at the Women's World Cup in 2019 and 2015, and the 2016 Olympic Games. 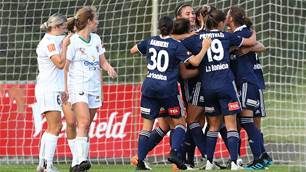