Norway, the world No.12 side, have a plan to neutralise Matildas striker Sam Kerr and get themselves on the scoreboard in their World Cup clash.

World Cup opponents Norway believe the Matildas are fragile at the back, and intend on exploiting that weakness fully in their clash.

Australia faces the world No.12 at Nice's Allianz Riviera on Sunday (AEST) after back-to-back wins over Brazil and Jamaica.

But they are just one of two teams, along with Cameroon, in the round of 16 not to have kept a clean sheet in the group stage.

Norway coach Martin Sjogren says the Matildas are a "very good team" but their leaky defence had been noticed.

"They are maybe not so strong in their defence," he said.

"They score a lot but they also let in quite a few goals. So I think we have a good plan on how we are going to handle this match tomorrow."

"That's why we keep working on our attacking style," he said.

"The best way to defend (is) by keeping the ball longer and having more possession than the opposition.

"We obviously know there's a few areas we need to tidy up - in particular when we do have the ball in the transition phase, we have to be smarter with it.

"We'll continue to be brave and play our way of football."

Australia have scored eight goals in the group stage - a tally only bettered by reigning champions USA, which began their tournament with a 13-0 thumping of Thailand.

The Matildas lead the competition for crosses and have scored a string of goals from crossed or lofted balls.

"Australia is a very offensive playing team, they have good players and strong players," Sjogren said.

"They have been changing a bit since last time. They are more direct now.

"We have huge respect for how they play. But we have also a very good belief in our own defence."

"She has shown her qualities for a long time. She's also a strong leader." 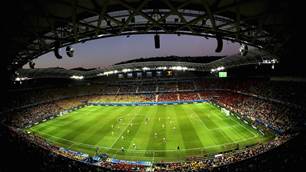 Ecstasy or despair - Matildas on the brink