Women's football is garnering more attention, publicity and mainstream respect than ever before. But it has been a transition for the players, according to one of the game's best, Lucy Bronze.

Reigning UEFA Women's Football of the Year, Bronze resides at the pinnacle of women's sport across Europe and at 28-years-old, is well-set to speak about the rise of the women's game.

The English superstar revealed that she'd noticed coverage of female football in the past had been overly kind to the footballers at the expense of genuine, hard-hitting coverage over the matches themselves.

"In the past women's football could be overly positive, maybe it is because people perhaps didn't watch the full games enough and just saw results," Bronze told BBC Radio 5 Live.

"During the World Cup there were more people watching who were picking out the good but also the bad, which I don't think we have really had before. I think that was a bit of a shock to the system for a lot of the girls."

The Matildas experienced this increased scrutiny first hand, as they garnered largely unprecedented levels of media attention across Australia after being listed as a potential favourite for the 2019 World Cup.

The team's subsequent Round of 16 knock-out was subsequently deemed underwhelming by the media and large swathes of the Australian public, with Steph Catley herself regarding the tournament as a "failure" for the team's "golden generation."

Bronze also experienced a massive increase in criticism and exposure, which she said is difficult to handle given The Lionesses' struggles of late, but is part and parcel of the positive progression of women's football.

"With that media attention, more people watching in general, your everyday person on the street, people are more in tune with what is happening in women's football now. At the moment that is probably not a good thing for us," she said.

"But in general it is good that people know what is going on and are showing a huge interest. That really changed from the start of the World Cup to the end.

"To a certain extent I do (appreciate the criticism). I am one of those players who is quite open to criticism and I am quite happy to take that criticism but I still think because people see me as Lucy Bronze over the last five years, people look at me and go 'she's a superstar and can do no wrong'.

"It is more the players who don't have such a high profile who tend to get dug out a bit more in women's football. It seemed to me from the World Cup that the better known you are the less you can do wrong." 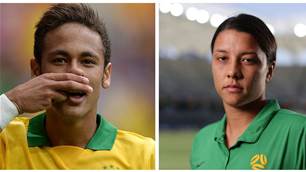 OP: Neymar earned more than every female footballer combined. How do we change this?