The Australian Diamonds first game without their veterans has seen the side run out 61-44 winners against South Africa in the Quad Series.

Australia was without Laura Geitz, Susan Pettitt, Sharni Layton and Madi Robinson, who had all retired but blooded debutant Kelsey Browne.

She slipped into wing attack with ease in the second half of the match which saw the Diamonds extend their lead.

However, the game didn't get off to the best start for Australia. South Africa gave the Diamonds a bit of the scare in the opening minutes as Proteas goal keeper Phumza Maweni putting enormous pressure on the Diamonds.

While the Diamonds found their feet, neither side was able to make valuable use of their defensive wins as they approached halftime with Australia taking a narrow lead into the break.

Australia needed to inject a spark into their game against a strong South African defence with Browne being the one to do so and she opened the game.

There was no looking back at that point as the Diamonds continued to extend their lead and dominance over South Africa.

The midcourt still remains a work in progress but they showed glimpses of confidence and cohesion in their first step towards next year’s World Cup in Liverpool. 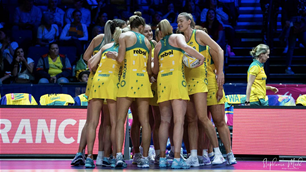