With the Minor Premiership already wrapped up, Melbourne City entered this game looking to extend their winning run to 11 games before focussing on next week's semi-final fixture against Western Sydney Wanderers.

The visitors from Brisbane saw their slim finals chances dashed last night when Wanderers beat Perth but went into the match determined to be the first to beat this season's runaway Premiers.

After a keenly contested opening half an hour, it was the home side who took the lead when an excellent run and cross by Ellie Carpenter found Milica Mijatovic with far too much time and space on the edge of the Brisbane area, and the Serbian made no mistake in opening the scoring with a delightful curling effort.

City had not conceded a goal in 680 minutes entering this match, and by halftime were just six minutes away from breaking their own record, but the Roar spoiled the party just four minutes into the second half when Lauren Barnes was dispossessed by Indiah-Paige Riley, who then expertly found Hollie Palmer who comfortably tapped into an empty net to level the scores at 1-1.

The home side's response was swift, and just six minutes later they capitalised on a Brisbane mistake and went back ahead thanks to an unerring finish by Ally Watt, after being played in by Yukari Kinga.

The two combined once again in the 69th minute to extend City's lead, this time Watt had the simplest of tasks to convert from five yards after Kinga's cross made its way through to the American.

Looking to add her name to the four-way tie at the top of the golden boot standings, Emily van Egmond was inches away in the 88th minute when her rasping long-range effort coming back off the crossbar, and there would be no further goals as City made it 11-straight victories after an opening-round draw Newcastle, the only dropped points of the campaign.

'I need a six pack after this!' - City hold Roar in opener 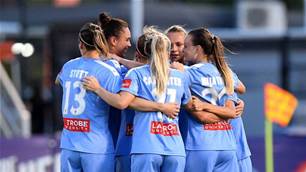