Matildas debut sensation Jenna McCormick was overcome by emotion after her national team debut, not that you could guess it by looking at her...

The composed, brilliant performance and rather stoic, ocker accent on McCormick belied how much her Matildas debut meant to her in Australia's 2-1 defeat of Chile at Bankwest Stadium.

"Look guys, it was pretty incredible," she said.

"I'm still wanting to be out there actually, I'm having to take in deep breaths and try to enjoy the moment.

"I don't really have many more words to be honest, in front of my friends and family and everything."

It's a charming moment for one of Australian football's new golden girls, who was perhaps doubted by some after plying her trade in the AFLW, the sport she supported as a child.

But the occasion of playing for her country certainly wasn't lost on her.

She was alongside former Brisbane Roar teammate Clare Polkinghorne at the centre of the Tillies defence, but her poise on the ball suggests she'd fit in with just about anyone.

"It did really help having Polks here but the calibre in this team is exceptional," she continued.

"I've never played with Steph Catley before but I'm completely confident when I play her the ball that she's going to be able to set up and move forward.

"I was really emotional, I fought really hard to keep a lid on it and not shed a tear. I'm going to go over to my parents and bawl my eyes out." 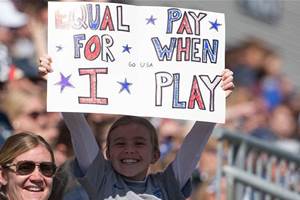 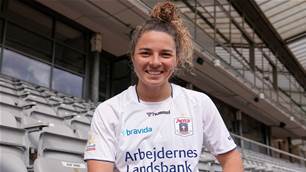