It was the second consecutive win for the Matildas at the Cup of Nations as they got a 4-1 win over the Korea Republic.

So here are three things we learnt:

The Matildas defence has always been a point of discussion among fans and media. Firstly, it's not an area of the field where there is depth and if there are players who could possibly fill in, they haven't had enough experience (with the exception of Laura Alleway).

While Gema Simon has been around the Matildas squads for the last 12 months leading into that, she has had a two-year period of injuries while Teigen Allen has just been brought back into the squad after an extended period away.

Secondly, it's an area of the field that needs to work on tightening up so they don't get caught out by fast-paced forwards.

This slow transition was exposed slightly by Football Fern Sarah Gregorius on Thursday night but the clinic passing from Korea Republic on Sunday showed that this was an issue.

It even led to the only goal the Matildas have conceded so far. While the defence doesn't send alarm bells ringing if they want to go further in a World Cup, it's an area that needs to be tinkered with.

"We always talk about the attacking quality we have and how we want to play our football but it shouldn't be an emphasis on that box than the one we defend," Matildas coach Ante Milicic said.

"I said at halftime the main thing is that we don't concede because it's an area we want to work on and we have spent a bit of time.

"There is a lot of work to do in our defensive structure and shape, even tonight we were very vulnerable in the transition stage phase."

At the other end of the field, Milicic will have more of an issue choosing which combination to start with. The six forwards currently in the squad all work well with each other no matter who is playing.

While creating chances has never been a concern (converting them yes), against Korea Republic, the way the Matildas created them was fantastic to watch. It was a fluid motion from one area of the pitch to another, it was also quick too, which caught the defenders off guard.

The Matildas have speed in the front so it's worthwhile using it.

Not only that but the ability of Emily Gielnik to play on both left and right sides is the kind of versatility needed for a World Cup. Also can't forget Hayley Raso who is able to beat defenders in a 1-on-1 like it's nothing, she makes it look easy.

It's an interesting situation of Milicic with Kyah Simon and Chloe Logarzo still on the sidelines through injury.

3. Decision making on the ball

It's another area that was exposed by Korea Republic on Sunday night. Just like they did during the 2018 Asian Cup group match against the Matildas, they rarely let the Australians have space when they were on the ball.

The Matildas were able to get out of those pressure building moments most of the time by passing it back and trying to re-build the attack again as the Brisbane Roar A-League team did under Ange Postecoglou. However, there were moments where they were caught out because they simply held the ball for too long or when they did pass it found the feet of an opposing player.

It may be just the tactics Korea Republic used to restrict the Matildas knowing it worked last time they faced each other, however, it will certainly be something that is looked at by the Matildas coaching staff.

Australia's decision making will only improve once they get use to Milicic style of play. 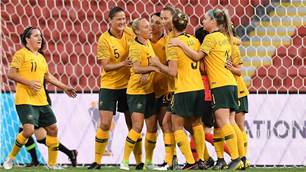 Matildas out do Korea Republic in Brisbane return 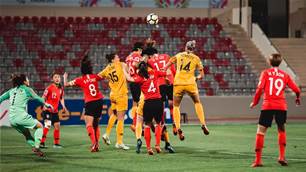