Australia have teed up a second crucial friendly in Europe next month as preparations for the 2023 Women's World Cup ramp up.

The Matildas announced on Thursday night a clash against EURO 2022-bound Portugal in Estoril on June 28, three days after taking on Spain in Huelva.

The last meeting between Portugal and Australia was also on the hosts' home turf at the 2018 Algarve Cup.

"We will be meeting Portugal at a time they will be in some of their strongest form with the European Championships just around the corner," Matildas coach Tony Gustavsson said.

"Matches against Portugal have always been tight encounters in the past, and we are anticipating they will once again be a fierce competitor next month."

We close out the June window with a clash against Portugal!

The June window sees a return to Europe and European opposition for the Matildas for the first time in nine months. It follows a trend of diverse opponents and styles with nations from North America, South America, Asia, and Oceania part of the mix.

"These two fixtures against strong nations such as Spain and Portugal will pose another new set of questions for us to answer as we continue to lay the foundations and embed the fundamentals of our team play," Gustavsson added.

"Taking on teams in their final preparations for a major championship will give us an additional occasion to work on developing our chemistry and combinations at high intensity." 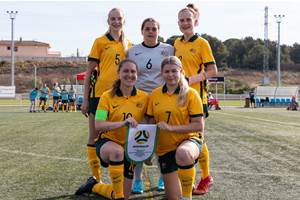 The ParaMatildas faced the United States on Wednesday in the inaugural IFCPF Women's World Cup Final. They finished the competition as silver medalists.

'Put me down, I'm up for it' Hrustic steps up on Europe's big stage

The Socceroos' Ajdin Hrustic's decade-long overseas football journey has been rewarded with a Europa League trophy with German side Eintracht Frankfurt.