Sam Kerr has completed her landmark season at Chelsea with a 28th goal and two more assists to inspire them to a 3-0 FA Cup triumph over Everton.

Sam Kerr has put the seal on her triumphant season with Chelsea by thumping home a superb volley for her 28th goal of the campaign in their comprehensive FA Cup fifth round victory over Everton.

On a miserable wet and windy night at Chelsea's Kingsmeadow home - the sort to make her long for Western Australia - the sunshine-loving Kerr made light of the conditions in Thursday's season-closer as she also assisted on the other two goals in the 3-0 win.

Trying to put the bitter memory of their Women's Champions League final hammering by Barcelona swiftly behind her, it seemed fitting that Kerr should end her brilliant season with a dazzling finish.

With Chelsea leading 1-0 after she had outmuscled the Everton defence and set up Guro Reiten for the 28th minute opener, Kerr put the result beyond doubt with her bravura 77th minute strike.

Battling hard to latch on to a long through ball, the Matildas' captain proved too strong and determined for Everton defender Rikke Sevecke before crashing her volley past Sandy MacIver, who'd already foiled the Australian twice in the preceding minutes with fine goalkeeping.

The victory left Chelsea still in with a shout of a domestic treble after their Women's Super League and League Cup triumphs but they'll now have to wait until next season in September to resume their FA Cup quest in the quarter-finals.

Kerr's final statistics for the season told of her remarkable contribution, with an involvement in 41 goals all told - 28 goals and 13 assists.

Kerr's Matildas teammate Hayley Raso had a good game for Everton and the complexion of the game might have been very different had her superb early cross to Valerie Gauvin been converted.

Instead, the Frenchwoman's neat flick produced a fine block from the line by Ann-Katrin Berger and from then on, last year's finalists never really looked to have the sort of firepower that Chelsea possessed with Kerr. 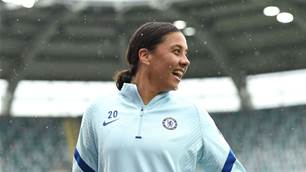