An easy night for the Matildas, who weren’t at their fluent best but still dominated possession.

SO HOW DID THEY RATE?

Lydia Williams - 7
Didn't have a lot to do. A few sloppy moments but nothing too dangerous.

Quality performance as you’d expect from the Matilda veteran. Clever finish in the first half after a good run.

A bit scrappy at times giving away the ball but always fought hard to win it back.

Solid at the back but to be fair, the opposition were hardly threatening. Plenty of touches and did her job.

Nearly 100 touches and lots of running. Heavily involved throughout the game.

Created five scoring chances in the first half. Decent shift.

Solid performance. Did what she needed to do. 132 touches, the most out of anyone on the field. Hardly surprising from KK. 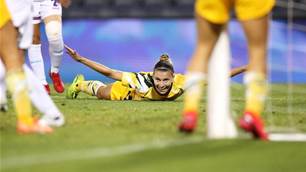