The Matildas have announced their 18-woman squad for the Tokyo 2021 Olympic Games.

Captained by Sam Kerr, the Matildas squad boasts 12 returning Rio Olympians for their second Games and six set to make their Olympic debut in Tokyo.

Falling to a heartbreaking penalty shootout loss to hosts Brazil in the Rio 2016 quarter-finals, the Matildas squad is determined to make Tokyo a memorable tournament.

The 18 players selected are a mix of youth and experience, with three players recording over 100 international appearances for Australia. Teenagers Cooney-Cross and Mary Fowler join Teagan Micah, Emily Gielnik, Hayley Raso and veteran Aivi Luik as the six Olympic debutants.

The Matildas qualified for the Olympics in March 2020, with Emily van Egmond and Sam Kerr leading the Australian charge during the AFC Women’s Olympic Qualifiers.  The women’s football team punched their ticket to Tokyo away from home with victory in Quang Ninh, Vietnam.

“Congratulations to the 18 players selected for the Australian Olympic Team,” Mr. Chesterman said.

The Matildas have shown they are a world-class team and we will be thrilled to see them proudly wear the green and gold in Tokyo.

“This team has shown incredible resilience and a tight bond to make it through the trials of the pandemic and I know they’re up for the challenge in Tokyo.

“While 18 athletes are achieving a fantastic Olympic milestone today, I also want to thank the countless family members, friends, supporters, coaches and teammates who have helped these athletes grow from junior footballers to Olympic athletes ready to compete on the world’s biggest sporting stage.

“The Matildas are out to make an impact in Tokyo and I know millions of Australian fans will be cheering them on from back home.”

The Matildas open their campaign on 21 July against New Zealand before meeting world number five and reigning Olympic silver medallists Sweden, and finishing the group stage against reigning World Champions and world number one USA.

Captain Sam Kerr said leading the team at an Olympics is a special feeling.

“It's a massive honour,” Kerr said. “Any time I pull on the jumper, I feel really proud, but to call yourself an Olympian is something special. Not many people get to do it so I'm really proud to be an Olympian and to represent Australia. I can't wait!

“It's different to say a World Cup just for the fact that it is the Olympics. It's a little bit prestigious, it’s just overwhelming. I grew up watching the Olympics like everyone else, so to be here, for my second time, is a dream come true.

The Matildas are a really, really exciting team. We're fast, we're strong, we’re fit, and I feel like the rest of the world knows that about us.

"It’s really about using our strengths to the best of our abilities. Off the field what people don't see is we're a really close-knit family.  We all have each other's back and we can't wait to go and represent Australia in the best way possible.

“I'm really proud and really excited for this opportunity, it’s something I definitely don't take for granted.”

At just 18, debutant Mary Fowler is the youngest on the team.

“It feels absolutely amazing to be selected for the Tokyo 2020 Olympics,” Fowler said. “As a kid, it's the one dream I had in sports so it feels amazing.

“The moment I found out I was going to Tokyo; I was in a meeting with the coaches, and I don't really expect myself to react overly over the top, to be so emotional.

“But when I got told, and I got handed a piece of paper saying I'm going, everything just clicked.

"Then I just started tearing up. I was a bit taken aback because this doesn't usually happen, but it was just a really good feeling.”

“First I want to thank every single player out there that fought to get a spot, and they've done it so that I had a difficult decision to make,” Gustavsson said. “That's how it should be for a head coach and that's also how we get better.

“The players that have been selected, it's a team with a lot of passion and pride to now represent the country.  It's a spirit within the team that I love.

“It’s a team and a roster that is very attacking balanced, but also with a lot of versatility. There's a lot of players in this roster that can play multiple positions with which is exactly what you need in an Olympic tournament.

On the pitch you are definitely going to see a brave team that's going to take a step forward. It's going to be an attacking mindset on the field.  Off the field, this team is always going to represent in the best way possible. It's an authentic team that is really true to who they are and very, very proud to represent their country.”

Mackenzie Arnold, Laura Brock, Charlotte Grant and Courtney Nevin have been named as the travelling reserves. If called up to the team due to injury or other circumstances, they would be selected to the Australian Olympic Team at that time.

The Football competition will run from 21 July – 7 August at venues around Japan.

The Olyroos squad for the Tokyo 2021 Olympic Games has been named and the team features some big omissions, so let’s see who didn’t make the cut.

'You have to go higher': Aussie coach on fire in Japan with Postecoglou playbook 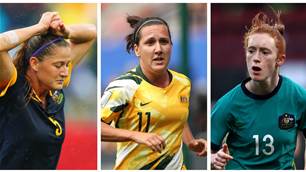