The Matildas have opened their Cup of Nations campaign with a 2-0 win over New Zealand.

The clash marked the 40th anniversary of the first-ever match for the Matildas which it was against none other than New Zealand.

It was the home side who had the better of the chances in the opening minutes but they were unable to capitalise on these opportunities.

The Matildas were able to maintain pressure on the Football Ferns defensive line consistently and it paid off when Sam Kerr won a foul on the top of the box. However, the resulting strike from Elise Kellond-Knight ricocheted off the crossbar.

There were a few times the Kiwi's were able to get in-behind the Matildas defence with Sarah Gregorius being the one receiving the through-ball but it would result in either Lydia Williams collecting the pass or the flag would going up.

But the deadlock was broken after a header found Emily Gielnik in the box for an effortless hit.

However, if the Matildas were going to secure the win they needed to be able to do two things: 1. Find that final touch and; 2. Finish. Those were to two elements lacking but it isn't a new problem however, it's one that needs to be looked at in depth before the World Cup.

Meanwhile, New Zealand needed to release the ball to their forwards earlier. Getting the through ball behind the Matildas defence seemed to be the path to go down, especially when you have an experienced and well-rounded backline.

As the second half got underway, it was much the same as the first. Australia started off pressuring the Kiwi defence but couldn't finish their chances.

It did leave the door open to New Zealand to try to find their way back into the clash but they didn't have many opportunities to do so. The Ferns had an unbelievable chance to level the game when Gregorius went one-on-one against Williams but the lob was just wide.

There were a number of changes at the hour mark with Amy Harrison, Teresa Polias, Lisa De Vanna and Laura Alleway all coming off the bench.

It was an interesting choice of substitutes with the way Milicic tactics had played throughout the first 60 minutes, however, they all fit into the side without a blemish.

Gielnik made way for Hayley Raso and the fresh legs lifted the team right away. It took just three minutes for the Brisbane Roar winger to find the back of the net, for just her third international goal.

For the Football Ferns, there wasn't much they could do because that through ball, which was working in the first half, saw them being caught offside or not having a player where the ball went.

Up stop is Suncorp Stadium on Sunday, March 3 with New Zealand facing Argentina and Australia taking on the Korea Republic. 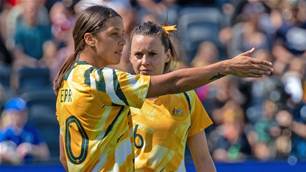