It would be next to impossible for him to do both roles and with the Matildas considered to be one of the hot favourites for the 2023 tournament, FFA will be under pressure to secure a well qualified full-time coach.

Iannotta, who’s ACF Agliana won the 1994/95 Serie A crown with Morace leading the way, believes her former team-mate is the perfect woman for the job.

“She’d be a wonderful coach for the Matildas,” insists Iannotta. “You could tell on the field that she was like a coach, she would help you on the field and explain movements and strategy.

“She has an intense character and understands the game very well and importantly, has a great relationship with the players.”

For the past 22 years, Morace has juggled being a lawyer with coaching, commentating and running FIFA coaching courses around the world.

She politely declined to be interviewed when approached out of respect for Milicic’s current position with the Matildas.

But the now 56-year-old Morace, who holds a UEFA Pro Licence, has had three international coaching stints and three club roles, including one with a men’s team.

It is understood Morace has long coveted a role with our Australia’s national women’s team, and is of the belief the Matildas have what it takes to win the 2023 World Cup, a tournament that is increasingly looking like it will be held down under.

“She told me it would be awesome to coach the Matildas,” revealed Iannotta. “She is a fully qualified coach with plenty of coaching experience, and she always wants to learn more about the game.

“I remember a few years ago she did send her curriculum for the position but she didn't get selected, they selected a female coach from Holland (Hesterine De Reus) who got sacked after a few months.”

Morace made a name for herself as a deadly striker, who carved out a trophy-laden playing career that lasted the best part of two decades. She starred for Italy in the inaugural 1991 World Cup, part of a decorated 153 game international spell that netted 105 goals. Domestically she scored over 550 goals, winning 12 Golden Boot awards in Serie A, including a staggering 11 in a row from 1987–88 to 1997–98.

Her most well-known coaching reign was for the Italian national team from 2000-2005, where she took them to two European Championships.

At the 2011 World Cup, despite losing star player Christine Sinclair, Canada received widespread praise for their tactical prowess which was based on a high tempo game in attack and defence.

Morace also had a short stint as coach for Trinidad and Tobago in 2016-17.

Morace’s first club role was with Lazio Women in 1998, before securing a surprise head coaching position in the men’s Serie C competition with Viterbese. The role only lasted a short while due to differences with the Club President, but Morace was the first woman in Italy to get a senior coaching role with a men’s team. Her latest club role was with AC Milan Women in 2018, where they finished an impressive third.

Morace has worked in Australia before, in 2015 she was appointed Technical Director at Western Australian NPL men’s club Floreat Athena FC, a year before they made the Round of 32 of the FFA Cup for the first time.

Morace’s technical and tactical nouse is well regarded in Italy, where she currently works as an analyst for Sky Sports Italy for the men’s Serie A competition.

Iannotta believes the Italian Football Hall of Famer is exactly what the Matildas need to become world-beaters.

“A good coach first works out and analyses the players, then works on a tactical approach," she said.

“You need to work and know each player's strength and weakness then work on constructing a strong team.

“Carolina very much has the ability to do this and certainly will bring her knowledge to Australian women’s football.”

With the hosts for 2023 due to be announced on Friday, Australia/New Zealand are now hot favourites after Japan pulled out yesterday.

With someone like Morace potentially at the helm, Australian football fans can dare to dream. 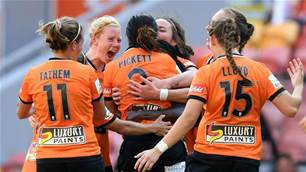