Gielnik and Polkinghorne will both play in Brisbane's final regular-season game against Newcastle on Sunday before departing for Sweden.

Brisbane have received a transfer fee for Gielnik, who scored eight goals in 16 games for Vittsjo last year before notching 12 in 11 matches for the Roar, while centre-back Polkinghorne was released from her contract last week.

The player registration window in Sweden closes on March 31, hence the early moves for Polkinghorne and Gielnik.

"I wanted to finish out the season with the Roar and that was my intention," Gielnik said.

"But in terms of what's best for me, I had no choice but to sign in Sweden so that I didn't miss that transfer window.

"It's just a really unfortunate circumstance.

"However, I think the squad depth we have is stronger than any other team in the W-League. I have full faith in the girls."

Both players will be keen for regular game time in Europe as they push for selection for the Tokyo Olympics under new Matildas coach Tony Gustavsson.

Gielnik, 28, is the third W-League player to make an early exit for Sweden, after Adelaide sold skipper Dylan Holmes to BK Hachen earlier this month.

The Roar are second on the table and all but confirmed to play finals, given their outstanding goal difference and are eyeing their first championship in 10 years.

"It's never easy to lose a player of Emily's quality, but when a situation like this arises we have a responsibility to achieve the best outcome," Roar chief executive David Pourre said.

"Financially, this is a strong result for Brisbane Roar. That's important.

"Emily's form over the past few months speaks for itself and we are comfortable with the fee as compensation for enabling this move to happen at a complex time." 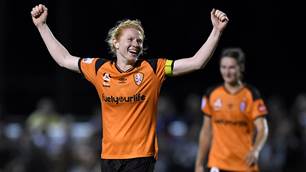 'An opportunity I need to take' - Polkinghorne to leave Roar