The 26 year has signed with AGF Kvindelfodbold, a Kvindeliga top flight Danish side in Aarhus, Denmark.

This is not the first venture abroad for McCormick, having previously won the Úrvalsdeild Icelandic league with Stjarnan in 2016, having played in the Norwegian Toppserien with Medkila in 2017 and having had a brief stint with Primera Liga side Real Betis last year.

In Australia, McCormick has played in every W-League season since her debut in 2012-13.  She has represented Adelaide United, Canberra United, the Brisbane Roar, the Melbourne Victory and most recently Melbourne City.  McCormick is also well known for having code switched to AFLW, playing for Adelaide from 2017-19 with whom she won the premiership.

However, her move to AGF was made possible due to her time with her first Adelaide team, specifically her 2014-15 season with Adelaide United.  Included in that squad was Katrine Pedersen, now head coach of  AGF.

Speaking of her move to Denmark, McCormick stated to AGF's website:

"I am really happy the opportunity to play with AGF in Denmark. AGF is a club with great traditions, and the team has already welcomed me in the best possible way.

"I look forward to contributing to a healthy and strong environment around the team under head coach Katrine S. Petersen, with whom I have played in Australia.

"I am a player who will always put one hundred percent into the work of the team, and I think that together we can achieve good results for AGF"

McCormick will not be the only Australian at the club.  Hannah Bacon most recently played for the women's side while Socceroo Alexander Gersbach & U-23 Socceroo Zachary Duncan both play for the club's men's side.

The South Australian defender will be hoping that her move to Denmark will reignite her chances at returning to the Matilda's fold. First capped in 2019, and receiving 3 other caps since then, McCormick has only appeared in the May 2021 Matildas Women's ID Camp in Sydney during the Gustavsson era.

She did get her first chance at Danish league play last Friday.  McCormick was used as a substitute in AGK's 2-1 victory against Kolding Q. 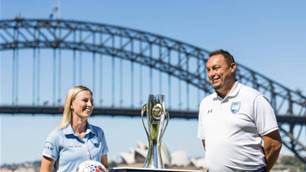 Fighting fires on and off the pitch