In a week that saw Chloe Logarzo net a stunning goal and Lisa De Vanna debut for Fiorentina, it was the humbling losses of our Aussies in the NWSL at the hands of North Carolina Courage that caught our eye.

In the NWSL Sam Kerr was the hero for Chicago Red Stars assisting a last minute winner in a 1-0 win over Orlando Pride for whom Alanna Kennedy played a full game while Mackenzie Arnold was on the bench.

Later in the week Kerr scored her 16th goal of the season and added another assist in Chicago Red Stars 3-0 win against Sky Blue FC while Mackenzie Arnold was absent.

Chloe Logarzo thought she had rescued three points at the death with a beautiful curling strike for Washington Spirit, but Steph Catley's Reign FC snatched a draw with seconds to play.

Logarzo was a 64th minute substitute, Amy Harrison played six minutes off the bench for Spirit while Catley played 90 minutes for Reign. Elise Kellond-Knight was absent from Washington's squad.

Alanna Kennedy played another 90 minutes later in the week for Orlando Pride and it was her turn to feel the six goal wrath of North Carolina Courage. Kennedy's Orlando lost 6-1.

In Germany Emily Gielnik was on the bench fo FC Bayern Munich's UEFA Champions League win over Göteberg. The Matildas winger played her first league match for Bayern, starting and playing 65 minutes in a 2-1 loss to Leverkusen.

In Norway Aivi Luik played a full match for Avaldsnes IL in their 2-1 win over Kolbotn.

In England Jacynta Galabadaarachchi earned herself a start for West Ham and played 56 minutes in a 1-0 win over Birmingham City.

Jacynta had a message to all of the fans who showed up to Rush Green today! 👏 pic.twitter.com/DhxddG6nls

In Spain Alex Chidiac played her first match of the season coming on as an 87th minute substitute for Atletico Madrid in their 3-0 win over Sevilla.

Lisa De Vanna made her debut for Fiorentina in the UEFA Champions League, playing 73 minutes in a 4-0 loss to Joe Montemurro's Arsenal. De Vanna scored her first goal and played 90 minutes in the Serie A in. 4-2 win over Florentia 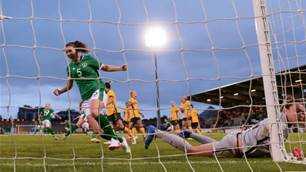