Matildas around Europe got their last chance to impress this weekend ahead of the squad’s announcement for the Tokyo 2021 Olympic Games.

The Matildas squad, who played Denmark and Sweden two weeks ago, have continued their Olympic preparation with a camp currently being held in Örebäcksvallen, Sweden.  The team did take a break though to watch the A-League grand final yesterday.

The team lost 1-4 to Thróttur and was eliminated from the Women’s Cup at the quarter-finals stage. Checker played all 90 minutes.

Selfoss next have a mid-week regular season match this Wednesday against Tindastóll.

Freshly capped Matildas goalkeeper Teagan Micah featured for the second week in a row for her Toppserien side Sandviken. It was arguably an important match for Micah who faced her old club Arna-Bjørnar.

Sandviken, who had registered four wins so far this season, tied the match.  With this draw they fell from first to third in the league.

Fellow Aussie Nikola Orgill also plays in Norway but for Klepp.  Her side faced first placed Vålerenga last Saturday and were heavily beaten 7-0.  Orgill was not in the side or on the bench for the match-up.

Emily Gielnik and Claire Polkinghorne both featured for their club Vittsjö on Monday.  The seventh ranked team lost 0-1 to eight ranked Djurgården.

Vittsjö next play Linköping on Sunday.

IN TRANSIT FROM CLUB PLAY

Chloe Logarzo, who had missed the last two international matches due to injury, returned to play for her NWSL club KC two weekends ago and last week in a mid-week match.  She came on for second half appearances in both cases and showed a return to form.

However, she did not feature with her NWSL club KC during the last weekend.  She was listed by the club as unavailable due to international duty.  One could argue this is a good sign for her inclusion in the yet to be released Olympic squad. 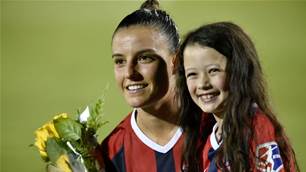