The 20-year-olds are joining Hammarby for the Damallsvenskan season, which kicks off at the end of the month, when Victory's A-League Women commitments come to an end.

Both players will feature in Sunday's preliminary final against cross-town rivals Melbourne City, with the winners to face Sydney FC in the grand final on March 27.

Midfielder Cooney-Cross and defender Nevin have made several appearances for Australia since debuting for the national team in June 2021 and were both part of this year's Asian Cup squad in India. "We've been scouting Kyra for a long time and tried to get her here before, so it's nice that it pays to be stubborn," Hammarby women's sporting director Johan Lager said.

"We get a versatile midfielder who can play in several positions and she is an athletic player with a very good strike.

"With Courtney, we get a strong defender who can play both fullback and centre-back.

"Also a player who is already part of Australia's national team."

Victory earned the right to face City on Sunday with a 2-1 win over Adelaide last weekend, despite Cooney-Cross being absent for the game due to suspension. Kerr strikes to give Chelsea some joy

Sam Kerr has scored a stoppage-time winner against Aston Villa in the Women's Super League to give Chelsea something to cheer at the end of a traumatic week. 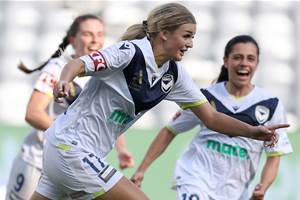 Melbourne Victory have edged out Adelaide United 2-1 to set up a meeting with Melbourne City to battle for a place in the A-League Women grand final.