The Young Matildas have defeated Thailand’s Under-19 side 2-1 in an international friendly at Sydney’s Leichhardt Oval on Friday afternoon.

After a scoreless first half, Rachel Lowe opened the scoring in the 55th minute, smashing the ball into the bottom corner from the edge of the penalty area.

Amy Sayer then doubled Australia’s lead in the 77th minute, finishing from close range after Mary Fowler’s shot was saved.

Thailand forward Nutwadee Pram-Nak ensured a nervous finish when she slotted the ball past Annalee Grove with nine minutes left, but the Young Matildas were able to hang on for the win.

For the Young Matildas, midfielders Amy Sayer and Rachel Lowe were excellent.

Sayer seemed to be everywhere in midfield, dropping back to shield the defence, but also getting forward and having several shots on goal.

Lowe tended to drift out to the right wing in the first half, combining well with Wanderers teammate Susan Phonsongkham.

In the second half, Lowe stayed in central areas and Princess Ibini started to drift out to the right wing.

It was from one of these runs that the Young Matildas took the lead. Ibini beat a defender near the corner flag, and when her cross wasn’t properly cleared Lowe took advantage to open the scoring. 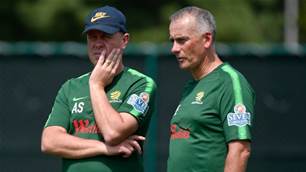